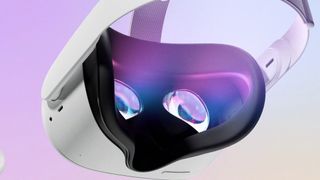 Leaked photos of the Oculus Quest 2 have hit the Internet thanks to reliable and well-known leaker WalkingCat. The bean spiller also revealed that the Quest successor could hit store shelves in just two months, RoadtoVR reported.

The Oculus Quest is Facebook's standalone virtual reality headset — perfect for gamers who don't have a VR-ready laptop to electrify more powerful systems such as the Oculus Rift S and the HTC Vive Cosmos. With the latest Quest 2 leak, VR fans are excited to see how Facebook has enhanced the popular VR apparatus.

"September 15," WalkingCat posted on Twitter, hinting that the Quest's successor could be headed our away in just two months. The leaker accompanied his Twitter post with a press image of the upcoming Quest 2.

The unverified photo suggests that the forthcoming, frost-white Quest successor will sport dual microphones, fresnel lenses, integrated audio technology, a larger light-blocking nose piece and a fabric interior that surrounds the optics. The Quest 2 also appears to be slimmer and lighter than its predecessor.

What's notably missing from the images, though, is an IPD adjuster that allows VR-headset users to decrease or increase the lens separation to a comfortable level.

WalkingCat's leaked images also support a recent Reddit leak of the Quest 2 that appears to be a prototype of the same device.

Is this a trustworthy leak?

WalkingCat has a history of leaking accurate information — the bean spiller dropped a similar leak ahead of Microsoft's official Hololens 2 unveiling.

However, even if these images are authentic, they may not reflect the final state of the Quest 2. With WalkingCat announcing a Sept. 15 release date, there's a good chance that the Oculus Rift 2 will be revealed at Facebook's Oculus Connect 7 event, which is an annual conference typically held in late September.

To stay abreast of the latest Oculus Rift 2 news, check out our oft-updated rumor hub here.