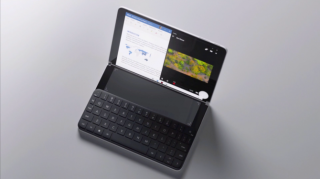 Forget about dual-screen devices, the future is triple-screen laptops and phones. At least, that's what Microsoft seems to think based on a patent (via Windows Latest) that turns the hinge of a dual-screen phone into a third display. The device looks a lot like the upcoming Surface Duo but with an extra slender screen.

Microsoft says the hinge could be used as a bridge between the two main displays so you see one continuous image. Alternatively, when the device is folded outward, the center spine would act similarly to Samsung's Edge display, as a place for “virtual controls, interface elements, notifications, bookmarks” and more.

You can think of it as the spine of a book except with quick-glance notifications and status icons for battery life, music controls and missed calls.

This design would not only enable new features but it'd solve a pain point with current dual-screen devices, which require a robust hinge to either fold a single panel into two displays or act as the bridge between two separate panels. Microsoft's Surface Duo uses the latter approach, but the hinge creates an unsightly break between the two panels.

By turning the hinge into a display, you can fill in the missing pixels between the two main screens. Of course, this will require some clever engineering, plenty of processing power and seamless software integration.

The latest version of the patent was applied in July 2019, so if Microsoft is going to use this three-screen technique, it would probably be in the Surface Duo 2 (if there is a second model).

Microsoft's Surface Duo is scheduled to arrive in holiday 2020 for an undisclosed price. The dual-screen phone runs Android 10 with heavy modifications made by Microsoft.