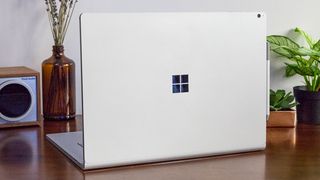 The Surface Book 2 is among the most ambitious devices released in recent years, but it appears Microsoft will push the limits even further with the next version. The long-awaited Surface Book 3 could sport an entirely new design with a detachable keyboard that has a note-taking panel on the backside.

The rumored changes were sparked by a new patent titled “Computing device with detachable writing input device." The filing includes an image of a computer with a stylus slot on the underside of a detachable keyboard that doubles as a digital drawing pad.

The mysterious device appears to be part of the Surface Book line based on the included image. Its familiar hinge creates a gap between the lid and the deck when closed, much like the Surface Book 2. And one of the patent images shows the screen, or the "main computing unit" being detached from the base for tablet use.

A laptop with a detachable keyboard that doubles as a writing surface may sound like a radical idea, but it fits with Microsoft's vision for the evolution of Windows 10 PCs.

Microsoft recently introduced several unique additions to its Surface lineup, including Surface Neo, a PC with a foldable display. On the software side, the company is putting the finishing touches on Windows 10X, an OS designed specifically for devices with flexible form factors.

But let's not get too excited. Companies file hundreds of patents a year, only a handful of which see the light of day. Also, Microsoft hasn't said anything about a device with a detachable keyboard/writing canvas, or even mentioned the Surface Book 3, which is expected to be released in 2020.

If Microsoft moves ahead with this design, it will mark a significant transformation for the Surface Book series, one graphic designers and photo editors should be looking forward to.