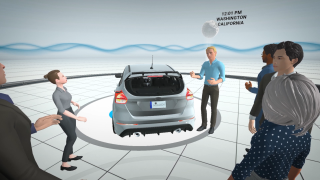 Given the surge in remote work, the interest in tools that allow people to continue to collaborate effectively from home has naturally surged as well. While the most prevalent of these are video conferencing apps, HTC has just released its more immersive VR option in the form of Vive Sync.

The service was been around for a couple of years in testing with some clients, but it is now available as a free beta for all to try. HTC describes the service as, "the all-in-one meeting and collaboration solution for VR." It is a blend of virtual reality and traditional business tools to give users a virtual meeting space that can accommodate up to 30 individuals at a time.

Let's take a quick look at everything that can be done in HTC's Vive Sync.

HTC views the ability to truly simulate interacting in the same space as a significant advantage of Vive Sync (and VR in general) over video conferencing or video chat options. The company thinks that this increases engagement and chemistry, thereby increasing productivity.

While you are trading off the ability to actually see the faces of your fellow employees, leveraging technologies such as Nvidia variable-rate shading, Vive Pro Eye, and full-body tracking, lets you feels closer to a face-to-face meeting as you get more of a sense of engagement with your coworkers.

Turning to the features of Vive Sync, the first step for users is to choose an avatar or use the Sync Avatar Creator app for iOS or Android to create a custom avatar using a selfie (see below).

The app duplicates exactly what you would be able to do in a traditional meeting room. Although you can take some liberties with what that meeting space looks like, with some of the demo spaces shown in the clouds, hovering above the water near the Golden Gate Bridge, in futuristic-looking grid whitespace, or in an auditorium in the woods.

Some traditional tools you have access are the ability to create whiteboards, share presentations or videos on a screen in your virtual space, or share files using the built-in OneDrive support. You also have some capabilities beyond what would be possible in reality, like importing 3D models that can be scaled up or down as desired.

At present, Vive Sync is compatible with all Vive devices, but support for Oculus Rift, Oculus Quest, Windows Mixed Reality and Valve Index devices are all planned for a future update.

Other planned updates include more robust host controls to allow for muting or locking features for some participants, recording of sessions, and a viewer mode for those that do not a VR headset.

HTC Vive Sync is currently a free beta, and there is no word yet on what pricing will look like following the beta period.