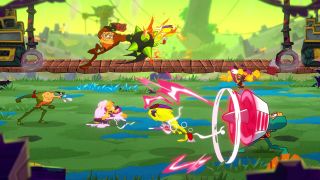 Battletoads will launch next month on August 20 for Xbox One and PC, and it will be available on Xbox Game Pass.

Many people who didn't grow up with Battletoads may have been put off by its initial announcement, but the latest trailer (see below) makes it look surprisingly fun.

Something that's a bit concerning is the way the co-op is presented. It states that it's "3-player couch co-op." Hopefully, it's not exclusively couch co-op, but if it is, Microsoft couldn't have picked a worse time to launch a game with no online play. If it does launch with local-play only, then we hope Dlala Studios pumps out an online update soon.

The writing in the trailer is cheesy, but it gives off fun and campy vibes. I guess we'll see how it really is when it launches August 20 for Xbox One and PC. We also expect that it'll also come to Xbox Series X in the future.