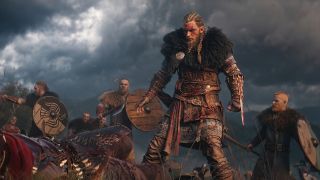 As the days go by, Assassin's Creed Valhalla narrative director Darby McDevitt continues to take questions from fans about the game's design, narrative and... well, pretty much everything.

A fan asked on Twitter, "Why did you choose to have the hidden blade on the upper part of the wrist?"

The answer was relatively simple: It's all about a Viking's honor.

Assassin's Creed Valhalla hidden blade is not so hidden

"It is a deliberate decision," McDevitt said on Twitter. "It's something that Eivor feels very strongly about. When he or she gets a hold of this hidden blade, it occurs to Eivor that it would be much more interesting to let people see this weapon, to be conspicuous about it. Vikings were known as having a sense of honor and it was very important that when you killed somebody, that you let people know that you killed them."

"And so having the hidden blade visible is actually kind of an extension of that honor. We want this conspicuous aspect of the blade to be reflected in the way that Eivor presents him or herself to the world."

For context, the hidden blade is typically placed on the inner forearm for discretion. While the hidden blade will certainly be front and center, this won't affect the actual mechanics of the weapon. You'll still be able to instant-kill fools as long as you're in stealth.