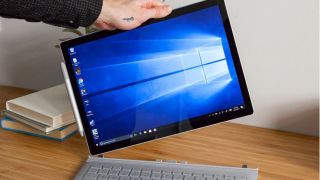 After years of anticipation, Microsoft finally took the wraps off Windows 10X last year at its Surface event. The streamlined operating system was said, at the time, to be built for dual-screen and foldable devices, like the Surface Neo and Surface Duo.

But Microsoft has gone quiet since revealing the OS several months ago, and the only update we did get is that Windows 10X will now ship on traditional single-screen clamshell laptops instead of devices with new form factors.

To make matters worse, Microsoft just wrapped up its big Build 2020 developer conference with hardly any reference to Windows 10X. If you had asked us last year what to expect from Build 2020, we would have guessed an emphasis on the upcoming OS.

This all sounds bleak but there finally appears to be some light at the end of the tunnel. Windows Latest reports, citing unnamed sources, that Microsoft will deliver Windows 10X features "sooner rather than later," and that the features would arrive in Windows 10 before the launch of 10X.

"During Build 2020, Microsoft officials didn’t mention these details, but multiple sources have revealed that the company is trying to figure out how they can make 10X features available on Windows 10," Windows Latest writes.

Furthermore, Microsoft could start testing a trust system for apps so "signed code and apps" with a good reputation can be safely installed on Windows 10.

For everyday users, Microsoft is considering bringing a new Windows Update experience that should allow the company to push out changes much faster than before.

We can only hope that this makes Windows 10 updates more reliable; A string of botched updates has forced Microsoft to investigate a range of reported problems, including missing data, broken audio and the Blue Screen of Death.

As for when these features will arrive, that remains unclear. However, Microsoft might feed these Windows 10X features to beta testers on Windows 10 before releasing them to the public.