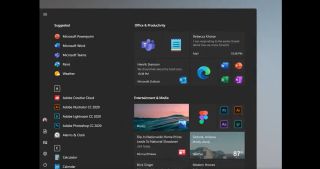 Microsoft is redesigning the iconic Windows 10 Start Menu and it wants your opinion before making any changes. The company posted a short clip of the UI update on Twitter and asked users what they thought of the new look.

The response has been overwhelmingly positive. Many Twitter users appreciate the continuity between the app tray and the tile icons, which are stripped of their colorful paint to blend in with the Windows 10 background theme (dark or light). A handful of people asked Microsoft to leave everything as is, and launch the new interface as soon as possible.

But not everyone was thrilled with the changes Microsoft has planned. A common complaint stems from the removal of text labels. One way Microsoft is modernizing the Start Menu is by removing the names of apps at the bottom of each icon. Some argue that without that text, it can be difficult to identify apps.

Created by the @Windows design team, this animated clip illustrates a sliver of the #UX evolution and modernization of the Windows experience. Let us know what you think in the comments below! pic.twitter.com/s4SVXncLEoApril 6, 2020

"WHY are you removing text labels!?! PLEASE tell me this is OPTIONAL and not DEFAULT!?!?. When doing tech support, do you know how frustrating it is telling a non-tech to select a non-text icon???" one Twitter user wrote.

"It is a bad idea to remove labels. Not too many people, including me, are able to read hieroglyphs = app icons. This would render my 80+ mom completely helpless," another noted.

It's a fair point, and one I hope Microsoft takes into account. If you've installed multiple apps that serve a similar function, it could be difficult to discern the difference between their icons. Programs with abstract labels can be equally confusing. There is an easy solution: give users the option to turn app text on or off.

If Microsoft brings back the text feature, then all that's left to do is roll out the update and hope nothing breaks along the way. We also wouldn't mind if the File Explorer got its long-overdue update.