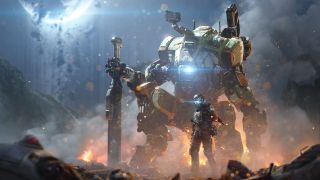 A new installment in the Titanfall series isn't entirely off the table according to EA CFO Blake Jorgensen, even though the company seemingly has no plans for one at the moment (via GamesRadar).

The info was revealed in an earnings briefing (reported by GameSpot) in which the company was discussing the topic of studio acquisitions. While Jorgensen refused to talk about whether or not the purchase of Warner Bros. was a possibility, he did point out that they "get to look at almost everything."

In this report, Jorgensen also commented specifically on the Respawn Entertainment acquisition. "We were able to bring them into the fold and give them incredible support and it was all driven by the fact that they have incredible talent. It wasn't about Titanfall, no offense to Titanfall. It's an amazing game and maybe you'll see Titanfall some time down the road. But it was really about the team."

Clearly, the topic of discussion wasn't about Titanfall, but it's briefly mentioned in a way that implies EA hasn't completely forgotten about it. This could mean anything, though, as the company is quite notorious for their claim that single-player games are a thing of the past.

It's easy to imagine the dozens of ways EA could spin a new game in this series, but if there were a Titanfall 3, then Respawn Entertainment would hopefully be given the freedom to make an incredible campaign with nuanced multiplayer modes.

From this statement, however, it's quite clear EA has no plans regarding a potential sequel. Respawn Entertainment is already hard at work with Apex Legends and a possible Star Wars Jedi: Fallen Order sequel.

Additionally, Titanfall 2 didn't meet sales expectations and that's probably more than enough for EA to be discouraged from touching that franchise when Respawn Entertainment is finding far more success with their other endeavors.