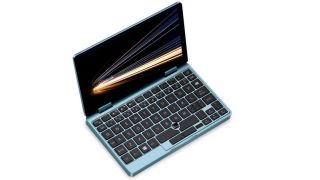 Laptops are getting smaller and smaller, but we have seemingly reached a whole new level of tiny. The OneMix 1S+ is a 7-inch laptop that can be rotated into a tablet (via Windows Central). 2-in-1 combos aren't uncommon, but ones this small are few and far between. In fact, the OneMix is smaller than some phones.

Most fascinating about this gadget is how it shows the laptop and phone industries working in reverse. While phones boast that they're getting bigger screens, laptops are attempting to pack as much power into as tiny of an exterior as possible.

Considering the OneMix 1S+ is actually smaller than some phones, it's amusing to imagine how much tinier laptops could get over the course of the coming years.