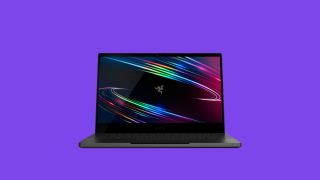 The Razer Blade Stealth is changing the ultraportable game. Razer’s ultraportable will be the first in the Stealth line to feature a discrete graphics card, essentially making it the world’s most powerful ultraportable –– and putting its competitors on notice. The laptop is available now, starting at $1,799. What? You didn’t think it was going to come cheap, did you?

Not much has changed in terms of the Stealth’s design. You’re still getting that inky black CNC aluminum chassis. But since the laptop is targeted towards mobile professionals who might want a more subdued look in the office, the lid lacks the glowing green tri-snake logo that we know and love. Instead, the emblem is embossed in a semi-glossy finish.

Razer’s not content to just have one “world’s first” claim. The company is also claiming that it holds the title for the fastest 13.3-inch display by way of the panel’s 120Hz refresh rate –– one of the only 13-inch systems with this feature. The 1920 x 1080 screen has a matte finish that will cut down on potential glare. However, matte displays can sometimes be detrimental to how well the color pops on the display, so we’ll just have to wait until we get one in the lab.

For those looking for super high-resolution graphics, there’s a 4K configuration of the Stealth.

The Stealth is stacked compared to most ultraportables. Instead of relying on Intel’s integrated graphics, the Stealth has an Nvidia GeForce GTX 1650 Ti GPU with 4GB of VRAM. That means that when the workday is done, mobile professionals can play some Doom Eternal or Ori and the Will of the Wisp to blow off steam.

In addition to the discrete GPU, the laptop is also equipped with a 10th Gen Intel Ice Lake 1.3-GHz Core i7-1065G7 processor with 16GB of RAM. There’s also a 512GB PCIe NVMe SSD. For ports, you have a Thunderbolt 3 port, a USB Type-C port and a Type-A port.

For such a slim laptop, the Blade Stealth is mighty muscular. One of the first slim ultraportables rocking discrete graphics, the Stealth stands in a class of its own when it comes to 13-inch systems. In fact, I’d love to test this against the Dell XPS 15 which has the same GPU. And while I appreciate a powerful laptop, I’m definitely curious to see how the battery life is going to play out on our battery test. But one thing is clear: Razer’s leveled up, now the ball’s in the industry’s court.