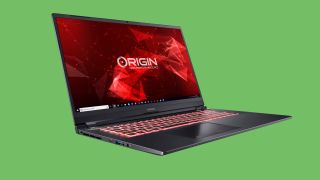 Origin already announced that it was bringing back the EVO15-S, and now the larger variant, the EVO17-S, is getting some love. The 17-inch gaming laptop is getting refreshed with Nvidia GeForce RTX Super graphics and 10th Gen Intel processors. Origin is also offering a 240Hz display and promises improvements to battery life.

The previous EVO17-S was a capable machine with fast overall performance and a snappy RGB keyboard. However, a poor display, awful battery life and a lofty price weighed it down when compared with other gaming laptops of the same caliber. Let's take a closer look at this 2020 model to see if Origin has put the new EVO17-S on a path to success, or if it'll succumb to the same pitfalls.

The EVO17-S is available today on Origin's website at a starting price of $1,999. It is being released alongside a nearly identical workstation called the NT-17.

We haven't seen the EVO17-S in person yet but images provided by Origin show a laptop with a similar, if not the same design, as the EVO we reviewed last year. The beefy gaming rig is aggressively angled and has a circular Origin logo centered on the lid. There is an RGB keyboard on the deck to give this the gamery aesthetic it yearns for.

You can leave your dongles with your MacBook, the EVO17-S has an awesome selection of ports. Those include three USB 3.2 Type-A ports, a Thunderbolt 3 input, a microSD card, a Mini DisplayPort, an HDMI and an Ethernet (RJ-45) port.

As I said about the previous model, the S in EVO-17S shouldn't stand for slim. At 0.8 inches and 5.1 pounds, the EVO17-S isn't the sort of laptop you want to haul around all day. It's also far from the heaviest or thickest gaming notebook we've seen so your back and shoulders shouldn't be in any pain taking the EVO17-S on short trips.

As the name suggests, the EVO17-S has a 17-inch display. On this latest model, you can choose from a 1080p panel with a 240Hz refresh rate, a 4K at 60Hz panel for the very best picture quality, or a standard 1080p at 144Hz display. A dim display hurt its predecessor so I'm hoping Origin uses more premium panels this time around.

Origin's EVO17-S hasn't changed much in design but it now packs the most powerful components, from an 8-core Core i7 CPU to the RTX 2080 Super Max-Q GPU. Origin is also promising longer battery life, which, if it holds out, would fix one of the issues we had with the previous version. You also get a choice of three compelling display options.

Overall, the EVO17-S sounds like one heck of a gaming notebook, and we're looking forward to taking it for a spin in the coming weeks.