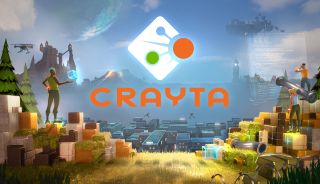 An exclusive new game for Google Stadia is launching that has the potential to be a real standout for the young game service after its somewhat rocky start. Crayta allows you to create and play games with others and is the first title to include Stadia's State Share feature.

The pitch meeting for the game must have been something along the lines of "imagine Fortnite meets Roblox meets Minecraft" and at least at first blush it looks like the developers have done an excellent job with the game and it is a perfect debut for State Share which allows users to share a link to allow friends (or fans) to join a specific point in a game (via Engadget).

So let's take a closer look at the game. Crayta's art scheme is similar to Fortnite thanks to the saturated colors, character and level design. However, it's actually more akin to Roblox in that players are able to design games or they can opt to play in the library of existing games that others have created.

The game creation is fairly unique in that it allows for real-time collaboration with other players to work on the games.  And since it's part of Stadia it is entirely cloud-based so there's no swapping files between systems or anything like that to slow things down.

People who are looking to build complicated games will want to break out the mouse and keyboard in order to use the "Advanced Mode." But you can get it done with the Stadia Controller if you just want to craft something based off one of the existing templates. Advanced Mode gives you an abundance of additional options like the ability to actually get into the Lua code that the game is built upon to craft much more expansive and unique games.

There are a variety of different game modes that you can use as the basic framing for your game, these include: adventure, castle crusade, collection game, empty game, free-for-all, gun game, obstacle course, survival, synchronous race, target practice, team capture-the-flag, team deathmatch, and team elimination. Each one has its own set of rules and building blocks.

Naturally, since the game is just launching there are a fairly limited number of levels from those that have been beta testing the game. You'll also get some levels from the developers just showing off what can be done with the templates. For those that are looking to just play the games, it will probably take a little time for the library to grow.

Crayta is launching on Stadia this Wednesday and will be free for Stadia Pro subscribers or $39.99 for those using the free tier.

Crayta game also notably includes State Share, a feature that Google discussed at the announcement for Stadia. It hasn't made an appearance until now and to be clear it is still flagged as a beta feature.

State Share allows users to create a link that will take another player to a specific point in a game. So if your friend hops in your Discord chat and wants to catch up with you in a game they will be immediately transported to your location. It's a great fit for Crayta to let friends let you quickly join you either building or playing games.

Hopefully, we see this functionality rolled out to more new games on Stadia going forward as it is a potential differentiator that the service could really use right now.