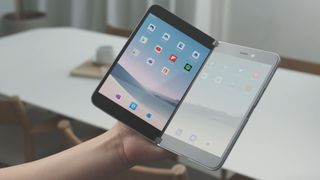 We had heard the Surface Duo was ahead of schedule, but we didn't think it would come this soon. According to Windows Central, Microsoft's dual-screen smartphone will be released on the week of August 24.

If the report, which cites unnamed sources, is accurate then the Surface Duo will arrive in less than a month. Windows Central also says Surface Duo production has already begun but warns that the release date is subject to change.

The Surface Duo was scheduled to be released in the "Holiday 2020" timeframe, so it appears to be several months early. This would be an impressive feat considering how many products have been delayed this year due to supply shortages caused by the coronavirus.

What is essentially the laptop version of the Surface Duo, the Surface Neo, appears to be one of those victims after Microsoft dropped the "Coming Holiday 2020" tagline from its product page.

Prior evidence of an early Surface Duo appearance included an FCC and Bluetooth SIG certification. Whenever a product is approved by the FCC, it usually indicates an imminent launch.

Various leaks have also given us a look at the Android phone in the wild. A pre-production unit of the Surface Duo was spotted on the desk of Frank Shaw, Microsoft's corporate vice president of communication, who had uploaded a photo of his home office onto Twitter.

As a reminder, the Surface Duo is an Android phone with two 5.6-inch, 1800 x 1350-pixel screens separated by a flexible hinge. The Duo can be used in various modes: open to one large 8.3-inch screen, folded to a single 5.6-inch display, or closed to protect both panels when it's not in use.

We've reached out to Microsoft to see if we can get some specific about the Surface Duo's release. Whether we get a response or not, we'll be keeping a close eye on Microsoft next month to see if it launches the long-awaited Surface phone.