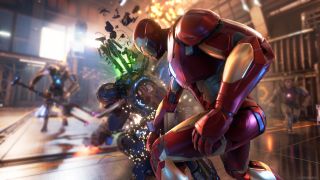 Square Enix and Crystal Dynamics are finally unveiling more gameplay for Marvel's Avengers. Quite some time has passed since it was last shown, so we'll get to see how different or similar it all actually looks from the original demos.

Below, you'll find where and how you can watch the Marvel’s Avengers War Table livestream today, June 24 starting at 10am PST or 1pm EST.

You can watch the Marvel’s Avengers War Table livestream via the linked video above, or you can follow along directly through the Marvel's Avengers website (it has the same link as the one above).

We know for sure we're getting some new gameplay footage as well as some co-op gameplay, which should be exciting. We're not entirely sure how the co-op is going to work just yet, but we do know that the cooperative missions will be separate from the main story arc.

We got to play as the revealed Avengers, including Ms. Marvel, last year, which was incredibly fun. It's possible that we might get a character reveal today, considering Crystal Dynamics teased that there would be more characters coming to the game post-launch.

Stay tuned for the reveal, starting at 10am PST / 1pm EST.