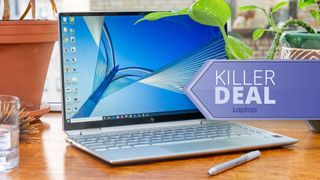 Presidents' Day is still a few days off, but HP's laptop sale is in full swing right now.

In our HP Spectre X360 review, we loved its stunning design and epic battery life, which lasted 13 hours and 20 minutes in our Laptop Mag Battery Test. In one test, we opened 20 Google Chrome tabs with multiple streams and videos running in the background and the Spectre's performance didn't waver.

In terms of connectivity, the Spectre X360 is fitted with a USB Type-A port, a headphone/mic jack, two Thunderbolt 3 ports, and a microSD card slot.