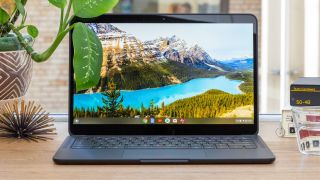 Google has reportedly made strides in developing its very own processor that'll be used in Pixel phones and Chromebooks starting sometime next year.

The report comes from Axios, and if it's accurate, Google could cut off both Intel and Qualcomm all in one fell swoop.

According to Axios, the new chip is code-named Whitechapel and was designed in partnership with Samsung, which isn't all too surprising. For context, Samsung also manufactures Apple's iPhone chips as well as its own Exynos CPUs.

Despite that, Google's 8-core ARM processor will feature hardware optimized for Google's machine-learning technology. And a portion of the CPU's silicon will reportedly be used to improve the performance and "always-on" ability of Google Assistant.

So, what does all of this mean? Well, as we've seen in the Asus ROG Zephyrus G14's new AMD Ryzen CPU -- the processor impacts everything, from performance to battery life. If Google can make a custom CPU that rivals those from its competitors, then the company can gain even more brand-authority for its premium Chromebooks, like the Pixelbook Go.

Before you get too excited, take all of this with a dose of skepticism because Google has yet to confirm the information.