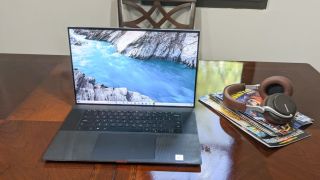 Dell resolved an issue affecting the XPS 17 9700 and Precision 5750 where the laptops' batteries deplete under a heavy workload even when connected to a charger.

Unfortunately, the fix only applies to new units — current owners with an affected XPS 17 or Precision 5750 will need to send it in for repairs or replacement.

Dell told me that new orders of the XPS 17 and Precision 5750 wouldn't be affected, but that it would "contact customers with potentially affected systems for resolution." Instead of waiting, you can call Dell's support team, which is aware of the faulty serial numbers and should resolve your issues with no questions asked.

“Dell has identified an issue on a limited quantity of XPS 17 9700 laptops and Precision 5750 mobile workstations where users may notice their battery depleting at a higher than expected rate under sustained heavy workloads and while connected to AC power," Dell told Laptop Mag.

"Dell has rectified the behavior, and current orders for the products are unaffected. Dell will contact customers with potentially affected systems for resolution. Customers may also contact Dell Technical Support for assistance."

We first heard about the charging problem a few weeks ago when it was reported that any task requiring more than 100 watts of power could cause the XPS 17's battery to slowly decline when the laptop should actually be recharging. Dell originally told us that it was "normal behavior" but it now appears the company was working on a solution.

Notebookcheck ran some tests to figure out exactly what was going on. The site played Witcher 3 and found the total system power to be around 135W, marginally above its 130W max charging rating. However, a multimeter measured only 105W of power coming from the AC adapter. As a result, the 91Wh battery in the XPS 17 went from 100% to 65% (60.5Wh) charged after two hours of gaming.

XPS 17 owners had posted similar results on social media and forums. Now those owners will now need to deal with Dell's customer service to get a properly functioning laptop.

It's a shame because we praised the XPS 17 in our review for its attractive chassis, fast performance, great battery life and excellent audio.