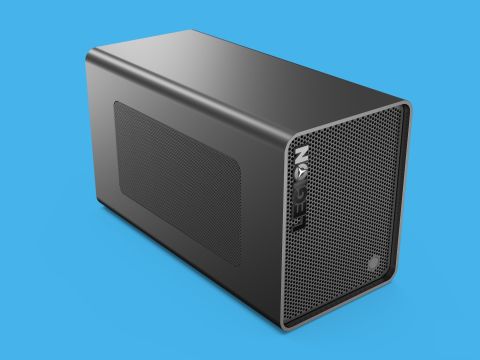 The Lenovo Legion BoostStation eGPU transforms your laptop into a formidable gaming system.

A new challenger appears. In conjunction with the company’s sleek new gaming laptop, the Legion Y740S, Lenovo is launching its first-ever external GPU. Dubbed the Lenovo Legion BoostStation eGPU, the device is priced at $249 and set to launch sometime in May.

As the name suggests, the device is designed to give your laptop a significant graphical boost via a desktop GPU housed within the enclosure. The BoostStation plays nice with everyone, supporting both AMD and Nvidia cards. And while Lenovo’s pushing it to be paired with its Legion line of laptops, the box should work with any laptop with a Thunderbolt 3 port, essentially transforming just about any ultraportable or mainstream laptop, into a serious gaming or virtual reality-capable rig.

Keeping with its office-friendly design language, the BoostStation has a very stately, low-key design. The 14 x 6.8 x 8.3-inch box is made of dark gray aluminum with a transparent mesh window on the left so you take a peek at your card. It also comes in handy for cooling. The box is on the heavy side at 18.7 pounds. The Razer Core X (14.7 x 9.1 x 6.6 inches), is noticeably lighter at 14.3 pounds.

There’s plenty of room for a full-sized graphics card in there as well as either a 2.5 or 3.5-inch hard drive or SATA SSD. Or you can place a pair of PCIe SSDs in the enclosure and that’s with the 500-watt power supply.

As a fan of technicolor gaming systems, I wish the interior of the box had some sort of customizable backlighting. But that’s just me.

The BoostStation supports both AMD Radeon and Nvidia GeForce desktop cards. But whatever card you choose to house in the enclosure, it can’t be any larger than 12.6 x 5.9 x 2.4 inches. And while most eGPU manufacturers only sell the enclosure, Lenovo is offering several configurations that bundle the GPU with the box.

Nvidia fans can choose either a GeForce GTX 1660Ti card or an RTX card starting at 2060 Super going all the way up to 2080. AMD fans are much more limited in their selection as Lenovo is currently only offering the Radeon RX5700XT GPU. Pricing information on any of these bundles has not been released as of press time.

As with most eGPUs, the BoostStation’s ports are all located along the rear of the device. You get two USB 3.1 Type-A Gen. 1 ports, a USB 2.0 port, a Thunderbolt 3 port, HDMI, Gigabit Ethernet and an AC power port.

Lenovo is making a bold, yet understated statement with the Legion BoostStation eGPU. It wants gamers to have the best of both worlds -- a lightweight gaming system for work and on-the-go gaming and a full-blown battlestation at home. Equipped with the right GPU, the BoostStation provides the latter, adding a heaping helping of power to any laptop attached to the enclosure. And it has plenty of ports to create a formidable gaming station at an aggressive price.

It’s not a move we expected from Lenovo, but CES has always been an event that’s full of surprises.