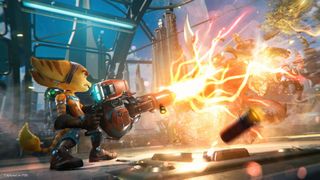 Ratchet & Clank is back after a soft reboot in 2016 re-established that the series still works wonders in the modern generation. While four years may not seem like such a long time ago, it was difficult to predict how soon Insomniac would revisit the series, especially when Marvel’s Spider-Man sold insanely well and might have become their main focus for the future.

Thankfully, fans don't have to wait any longer. At Sony’s Future of Gaming presentation, we got an incredible trailer that showcased phenomenal visuals, a new mechanic that makes use of the PlayStation 5’s insane loading speeds, and a glimpse of a new character that has fans eager to learn more about her.

Here’s all the information we could find about the new Ratchet & Clank, including its release date, gameplay details and story details.

Ratchet & Clank: Rift Apart was revealed recently, so we likely won’t know its release date for quite some time. There’s also little reason to believe the game will be releasing this year, as Insomniac and Sony probably would have called it a launch title or launch window title if it was set to come out in 2020.

We can also safely presume that because Spider-Man: Miles Morales is set to release at the end of the year, Insomniac would not release two games so closely together. Studios don't typically overlap launches because they don't want to compete with themselves for sales. For these reasons, we can only assume Rift Apart won’t be coming out until sometime in 2021.

Insomniac blew us away with an announcement trailer that shows Ratchet & Clank seamlessly traveling between half a dozen different worlds within a minute or two. This is clearly an attempt by Sony to show off the PlayStation 5’s phenomenal SSD, which will allow for blisteringly fast loading speeds capable of fully rendering an entire zone in mere seconds.

Fans also got glimpses of a brand new character in this trailer. While we don’t even know her name yet, the gaming world has blown up in excitement over her, with lots of cool fanart circulating around the internet. The best part is that our mysterious female Lombax will be playable. This was revealed in a tweet by Insomniac Games not long after the reveal of the game, and while we’re unsure to what extent we’ll be playing her, it’s great to see a strong feminine protagonist seize the world of Ratchet & Clank and kick butt.

Fans were also graced with an incredible gameplay trailer, which showed off a mix of fresh mechanics and old beloved weapons. Immediately, we get a glimpse of the new Rift Tether ability, which lets you transport Ratchet through scripted spots in the world. However, whether or not you can freely teleport at some point in the game remains unclear. This new mechanic might be Insomniac’s replacement for the Swingshot, which was a common gadget used in the series to let Ratchet traverse areas easily.

This trailer also showcases the classic moveset, with Ratchet tossing his wrench, shooting his basic level one weapon, and dodging mid-air to avoid enemy blasts. We also got a glimpse of some new weaponry, including a floral sprinkler that freezes enemies and something called the Shatterbomb, which seems to completely tear enemies apart.

Before Rift Apart was announced, I was personally hoping we wouldn’t get another retread of an old story like 2016’s Ratchet & Clank. If we had, it would probably have been a revisit of the story and worlds from Going Commando, the second title in the original series. Going Commando is one of the best in the franchise, so this wouldn’t have been a terrible decision, but Insomniac Games have made smart moves in how it's tackling this latest entry.

By building out the concept and mechanic of “rifts,” we can now see Ratchet, Clank and the feminine Lombax tackle previously beloved worlds from some of the best games in the series and gorgeously built new ones. Insomniac Games also confirmed this in a tweet in which they claim we’ll “see alternate dimension versions of old favorites.”

At the start of the announcement trailer, we can see our two heroes appear within a Jurassic-esque area, which is an immediate callback to Tools of Destruction. These memorable glimpses happen a lot throughout, as we see both Ratchet and Clank teleport to a pirate ship that is likely a callback to Quest for Booty and a large desert world that resembles one of the best areas from A Crack in Time.