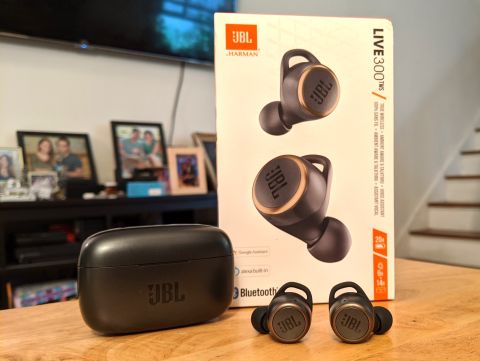 Give the JBL Live 3000TWS a listen if you value excellent midrange sound and robust aesthetics.

The JBL Live 300TWS is the company’s newest release in the true wireless category. These earbuds pack dynamic sound and smart controls into a ruggedly handsome chassis that matches the sub-luxury appearance of its popular over-ear headphones. JBL also designed these buds with splash- and sweatproof protection.

While bringing forth quality features, the Live 300TWS has distinguishable flaws that hinder its overall performance. This includes an unfavorable fit, mediocre listening modes and subdued bass.

For the extra coin, you can get more functionality and playtime from category leaders like the AirPods Pro and Jabra Elite Active 75t. However, the recent markdown on JBL’s buds does make this pair an affordably enticing option.

The JBL Live 300TWS, which originally sells for $149, is currently on sale for $119 at major online retailers, including Amazon and Walmart or directly from JBL. This model is available in four colors: Black, Blue, Purple, and White.

What's in the box?

These are some bulky, but stylish and sturdy earbuds you’re looking at. They share nearly the same aesthetics as the Live 650BTNC headphones, composed of a hard-plastic casing that feels similar to aluminum, and donning circular shiny accents on the front that add a touch of flair. The buds have an IPX5 coating to protect them from excessive sweat and heavy water splashing.

The Live 300TWS is bigger than some of the market’s more favorable oval-shaped options (e.g. Jabra Elite Active 75t, Samsung Galaxy Buds Plus) and stick out. If you want buds with a more discrete silhouette, these may not be it for you. The bold colorways look great, especially the black with dark bronze version, which complements the buds’ premium design. I also like that the buds come with numerous accessories.

JBL seems to have an infatuation with large charging cases. Despite the Live 300TWS’s case being lighter than the huge block of aluminum packaged with the JBL x UA Flash wireless earbuds, it’s still hulky and will leave you with bulging pockets. Another issue is the docking station. It’s not as user friendly as the Anker Soundcore Spirit Dot 2, which lets you drop the buds in to seamlessly charge and store on the go. Here you have to place them onto their respective slots and press down, so that they latch onto the charging mechanism. One positive I can share is that the case’s plastic chassis is strong and will survive hard spills to the ground.

The bulkiness of these buds makes them an uncomfortable and unstable wear. Each bud weighs 0.2 ounces, but they feel noticeably heavier in hand and on the ear than the AirPods Pro (0.19 ounces per bud) and Jabra Elite Active 75t (0.19 ounces per bud). The Live 300TWS also presses up hard against the ear, applying unwanted pressure that creates soreness after about 45 minutes. I found them a bit painful to sport after an hour of use.

Establishing the proper fit is a hassle as well. Again, size is the issue, as the large body interferes when trying to set the fin into the upper part of the concha. I wore the buds on walks and the fins constantly popped out, requiring me to stop every few blocks to stuff them back into place. One can only imagine how problematic this could be when running outside.

JBL is one of the few audio manufacturers to successfully program touch controls on its wireless earbuds, while adding as much functionality to them as possible. The Live 300TWS makes the most of its tiny real estate, placing a wide touch panel on the outside of each ear panel that supports several tap and swipe gestures. You can practically tap anywhere, even near the edges, and the buds will register commands accurately. Even better is how you can personalize the controls through the JBL Headphones app.

The right earbud operates as follows: play/pause music (1x tap), skip track or answer/decline calls (2x tap), play previous track (3x tap), volume up/down (swipe forward or backward), enable the digital assistant (tap and hold) or enter pairing mode (double tap and hold). That is a lot of controls for just one side. The left bud keeps it simpler with the ability to cancel a digital assistant request (1x tap), hear notifications (2x tap) or cycle through the different listening modes (swipe forward on left bud). All in all, the controls are responsive, though there is some lag: about 1 to 2 seconds depending on the command.

Like many of JBL’s current releases, the Live 300TWS has Google Assistant integration, and supports Alexa and Siri. The results are adequate, as the mics demonstrate great speech recognition, but pick up a lot of background noise. This can cause Google Assistant to misinterpret requests. When using the feature in quiet environments, both Google and Apple’s AI bots registered inquiries, word for word, and delivered responses quickly. You should be able to execute common tasks like accessing your calendar, opening Spotify or reading incoming messages without a hitch.

JBL is known for its emphatic, bass-forward sound, which is why I’m taken aback by the Live 300TWS’s tamed low end. The boomy response you would expect to hear on speaker-rattling songs is either absent or bogged down with distortion. As disappointing as this sounds, the buds have two things going for it: stellar midrange and vocal reproduction.

Mary J. Blige’s “I Love You” was a serene listen that highlighted the singer’s range; it’s impossible not to feel the lament in her voice on the bridge. The striking piano melody, which beautifully samples Isaac Hayes’ “Ike’s Mood,” also captured the mood perfectly, while Mary’s crisp harmonizing left me longing for more.

Switching to something fiery, Alanis Morissette’s “You Oughta Know” had a more acappella-ish vibe to it. The excellent vocal clarity made her aggression and inflection more surreal. Unfortunately, the catchy bassline and crashing drums were masked and only made their presence felt when listening at max volume. Super-bassy cuts like Run the Jewels’ “Out of Sight” also lost its edge and sounded harsh with the chorus and discordant effects creating sibilance.

Another factor that diminishes sound quality is noise isolation. The tips struggle to create a tight seal that prevents background clatter from entering the soundstage. I could hear my fiancée talking with her parents when trying to zone out to Spotify playlists, while loud noises, like a Mustang car engine and jackhammer, pulled me away from the music.

The JBL Headphones app has a few features that enhance the user experience. At the top of the list is the EQ to fine-tune the audio by manually tweaking the frequency levels to your hearing. I highly recommend using it, especially if you’re trying to get more bass out of these buds. If that’s too much work, there are a handful of presets (Jazz, Vocal and Bass) to choose from, though some sound a bit off; I noticed kicks and snares hit harder in Jazz mode than Bass.

Active noise cancelation is absent on the Live 300TWS, but JBL offers a consolation prize in the form of two other listening modes: Ambient Aware and TalkThru. The former basically opens up the soundstage to hear what’s going on around you, while the latter brings the volume down extremely low so you can chat with others without removing the earbuds.

Unfortunately, neither works very well. I couldn’t tell the difference between Ambient Aware and standard mode, as the level of noise around me sounded exactly the same. TalkThru lowers sound to about 10%, which makes it easier to communicate with others as the music continues to play in the background, but it’s so low that you won’t even hear it. You’re better off pressing pause and resuming play after finishing conversations.

Other notable features include Find My Buds and toggle controls for the listening modes, digital assistant, and auto-off setting, which places the buds in sleep mode when inactive for several minutes. This is a sufficient amount of features to work with, but there are other apps that offer more functionality.

JBL rates battery life at 6 hours on a single charge. Realistically, this is about 5.5 hours when factoring in high volume, media streaming (e.g. Spotify, YouTube), and wireless calls. Yes, it sounds disappointing, especially since it hovers around the same playtime as the AirPods (5 hours), but JBL’s power management allows you to squeeze as much juice out of the buds as possible.

Using them two hours daily, I barely noticed power decreasing until I hit about 10% near the end of the third day. Even then, I wasn’t fazed much, as quick charging assured me that I could generate enough juice to get through a quick conference call; 1 hour of use on a 10-minute charge is pretty sweet.

The charging case gets you an additional 14 hours of playtime. That is about two and a half charges extra, which is fine for coast-to-coast flights. I do wish it came with wireless charging, especially when seeing lower-priced buds like the Anker Soundcore Liberty Air 2 support the feature.

The Live 300TWS is a dependable calling headset. Talking to my fiancée while running errands outside, I heard her loudly and clearly. She mentioned my voice sounded a bit distant and muffled, but she was able to still make out what I was saying. Being indoors was more rewarding, with most of my friends complimenting how good I sounded, even with my television on in the background.

I was shocked by how quickly the buds paired to my Google Pixel 3XL and MacBook Pro; it’s almost as fast as the Google Pixel Buds with Android devices. Bluetooth 5.0 was strong as well, giving me up to 40 feet of wireless listening before audio began stuttering. The only thing missing is multipoint technology, which would have allowed pairing to two devices simultaneously.

The JBL Live 300TWS are capable earbuds that deliver fair performance for the price, and by that, I’m referring to its current price drop: $120. Your ears will certainly be met with some compelling mids and vocal clarity. Being able to customize the soundstage is also a huge benefit for audiophiles who prefer a signature with more highs or lows; granted, the latter doesn’t carry the same pure bass resonance as some of JBL’s other models. The smart controls and steady wireless performance add to the Live 300TWS’s appeal as well.

Where the buds fall short against the competition are comfort, special features, and battery life. Their large form makes it difficult to establish a secure fit. Both listening modes (Ambient Aware and TalkThru) need more work. And when looking at what other models provide in terms of playtime on a single charge, these buds only offer half of that.

If those are compromises you can live with, then the Live 300TWS is worth taking into consideration, especially on discount. Otherwise, it’s worth spending extra on buds that deliver more bang for the buck such as the Elite 75t/Elite Active 75t or Galaxy Buds Plus.