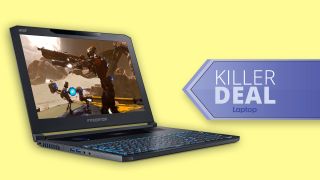 Update: This deal was live on B&H Photo Video but is now sold out. We will update this article if the Triton 700 goes back in stock at $999.

Black Friday deals are here, and a sale on the Acer Predator Triton 700 brings it down from $2,999 all the way to just $999. That makes this premium gaming laptop cost the same as a cheap gaming laptop. It's one of the best Black Friday gaming laptop deals we've seen, and it's now live at B&H Photo Video.

Keep in mind we haven't reviewed this machine, however, so we can't attest to its merits. The Triton 700 has a mechanical keyboard, but we're not fans of the forward placement. Since it doesn't have a palm rest, it won't be very comfortable to type on.

However, The machine does offer a 15.6-inch, 1080p Nvidia G-Sync panel, which is pretty awesome.

If this isn't what you're looking for, then take a look at our best Black Friday deals and best Cyber Monday deals hubs to see more hot products on sale.