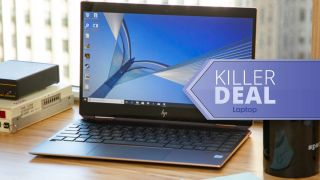 It's dads and grads season and chances are you're torn between giving someone special a new laptop or tablet. If so, you might be interested in knowing that our favorite 2-in-1 is now on sale for its best price ever.

It's one of the best laptop deals we've seen so far for this month.

In our HP Spectre X360 review, we were impressed by its thin and light, luxurious design, complete with a class-leading keyboard. We gave it a 4.5 out of 5 star rating and the Editor's choice award for its vivid display and outstanding battery life.

Design-wise, HP's attention to detail is outstanding. The Spectre X360's sleek aluminum chassis is beautifully contoured, featuring faceted edges and sharply chamfered corners that look as if they were cut by a master jeweler.

In terms of connectivity, the Spectre X360 is fitted with a USB Type-A port, a headphone/mic jack, two Thunderbolt 3 ports, and a microSD card slot.

So if premium design, versatility and long battery life are priority, the Spectre x360 2-in-1 is a solid choice.