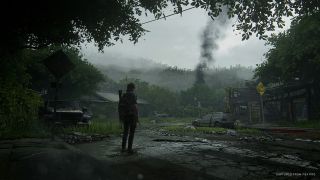 Update on May 27: The stream was about 23 minutes long with new details regarding the game and gameplay from Neil Druckmann, followed by a nearly 9-minute long section of actual gameplay. You can watch the full video via the YouTube embed below or we have covered some of the highlights at the end of the article.

After The Last of Us Part II was victim to a particularly spoiler-filled leak last month, we've already gotten some looks at the new gameplay mechanics. Today, we got another deep dive into one of the last major PS4 exclusives.

On today's State of Play stream, The Last of Us Part II Director Neil Druckmann gave us another preview of the game that includes eight minutes of brand new actual gameplay footage.

You can catch the stream on the Playstation YouTube channel, embedded below, or head over the PlayStation Twitch channel if you prefer.

If you are tuning in to see if there are any juicy PS5 details revealed, we'll save you the time, Sony has already said in its blog post that "there won't be any PS5 news or updates in this episode, just a deep dive into the world of The Last of Us Part II."

The stream was about 23 minutes total and Druckmann covered a lot of ground in the first half, describing what's going on in the world of The Last of Us Part II as the game opens along with some of what happens along the way.

One of the big focuses early on was the "unprecedented scale" of the game, utilizing horses to get Ellie around the massive world and changing landscapes is critical and other vehicles will help you traverse the landscape as well, like boats to navigate the sometimes flooded streets of Seattle.

Traversal, in general, is clearly a major aspect of The Last of Us Part II gameplay with new mechanics like climbing, jumping, and using a rope to swing as well as ascend and descend as needed to navigate the landscape.

Ellie's agility is crucial to your survival in the game with the dodging mechanic that was shown off in the previous gameplay reveal. Fleeing your attackers when overwhelmed was another element that Druckmann covered in detail, with the ability to break glass and crawl through tight spaces help Ellie to regroup in a fight.

Ellie can stun enemies with throwables or slip behind enemies to use them as shields.

Speaking of Ellie's weapons, the workbench is again the key to customizing your weapons along the way to fit your style of gameplay, and the skills and upgrade manuals will do the same for Ellie herself. While stealth and agility are put on display with weapons like pistol suppressors and arrows helping to keep Ellie concealed, things can get loud with proximity mines and explosive arrows when stealth isn't an option.

Turning finally to the enemies, there are two rival factions fighting within Seattle that Ellie must contend with, the WLF militia group and the Scars. The former is well equipped with military gear, while the latter opts for more silent weapons.

And then, of course, there are the infected, with all of the familiar varieties like runners, clickers, and stalkers along with a host of new kinds including shambles who will explode in a cloud of corrosive gas and others that will just have to wait for the game to ship.

While it did feature some light spoilers, overall it was just an excellent demonstration of the gameplay and left us more excited than ever to get our hands on it.

Today's best The Last Of Us: Remastered deals
The Last of Us Remastered...
Amazon
Prime
AU
$25.40
View
Last of Us
Amazon
AU
$100.49
View
We check over 130 million products every day for the best prices
Be In the Know