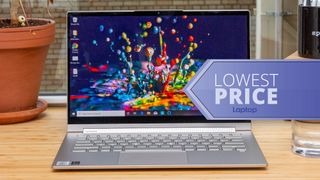 Lenovo's Yoga C940 is one of the best 2-in-1 laptops you can buy. For a limited time, you can score one for a great price in an early Presidents' Day sales.

In our Lenovo Yoga C940 review, we loved its slim premium design and vivid display. We gave it our Editor's Choice award for its fast performance and long battery life.

Performance-wise, the Yoga C940 landed a score of 18,709 on the Geekbench 4.3's overall performance test. That beats the premium laptop average of 16,314. To gauge its multitask-handling performance, we opened 20 Google Chrome — four of which were playing 1080p YouTube videos — and our machine never stuttered.

Connectivity-wise, the Yoga C940 packs two Thunderbolt 3 ports, a USB Type-A port and a headphone/mic jack combo. So if you're in the market for a versatile 2-in-1 laptop, the Yoga C940 fits the bill.