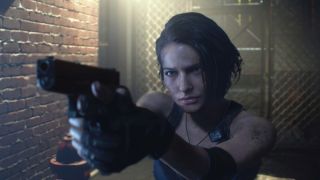 In Resident Evil 3: Raccoon City, a contagion wreaks havoc on a metropolis as S.T.A.R.S. member, Jill Valentine, seeks to escape the mayhem. (Sounds awfully familiar, doesn't it?) A demo of the highly anticipated, apocalyptic thriller will be available for PC gamers via Steam on March 19, Polygon reported.

The official Resident Evil 3: Racoon City trailer takes viewers on a zombie-filled adventure as infected residents lumber toward a gun-wielding Valentine; meanwhile, the relentless, growling Nemesis adds a new layer of evil to the game.

In the demo, which is dropping at 1 p.m. ET on Thursday for Windows PC users, the badass female protagonist will try to rescue Raccoon City civilians as she's accompanied by fellow good guy, Carlos Oliveira. The Resident Evil 3: Raccoon City taster will also feature a special scavenger hunt -- 20 small Mr. Charlie bobbleheads will be hidden throughout the virtual world for players to find.

As Racoon City is ravaged by a contagion called T-Virus, Capcom -- the developer behind the game -- warns players that they should take a stealthier approach instead of barging through the city with guns blazing. "It may be a demo, but you'll need to conserve your ammo and items if you want to stand a chance of surviving."

A slice of the big game isn't the only offering Capcom is dishing out. On March 27,  fans will be able to enjoy an open beta for Resident Evil Resistance, which will be a free multiplayer game. The game will allow players to join a group of four Survivors, but if you have an evil side, you'll love that there's also an option to play a malevolent character.

"If you’re feeling sinister, take control as a Mastermind, watching the Survivors progress through cameras as you attempt to thwart their escape by placing traps and creatures while manipulating the environment to your advantage," Capcom wrote.

The open beta for Resident Evil Resistance will conclude when the full version of Resident Evil 3: Racoon City comes out on April 3.