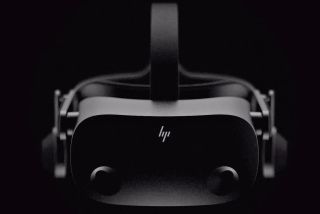 The new Steam page features an suspenseful trailer of the next-gen headset emerging from the darkness. "No compromises," the 15-second video said, which may be insinuating that HP is ensuring top-notch compatibility with SteamVR and Windows Mixed Reality.

"The next generation HP Virtual Reality HMD–developed in collaboration with Valve and Microsoft–delivers an immersive, comfortable and compatible VR experience. It’s the new standard in VR," the new Steam page wrote.

At first glance, it appears that the upcoming HP headset -- dubbed HP Reverb G2 by the VR community -- has dual external cameras on its front, but it's unclear whether there are additional cameras to further enhance the VR gaming experience (e.g. inside-out tracking cameras). And as WindowsCentral points out, it looks like the new HP Reverb G2 may inherit Valve Index's off-ear headphone design.

On that note, you may be wondering if you should wait until the launch of this next-gen HP headset -- backed by triple-collaboration power -- before immersing yourself into the Half Life: Alyx VR world. If you're like us, your decision will likely depend on price.

With the promotional language used in the trailer, we doubt the price point will be as bank-account friendly as the Oculus Rift S. But we hope it will hover around a mid-range sweet spot that's not as high as the Valve Index's $999 sticker price.

WindowsCentral noted that folks can stay updated on the upcoming HP headset by signing up at HP.com/Reverb (but as of this writing, the website seems to be down).