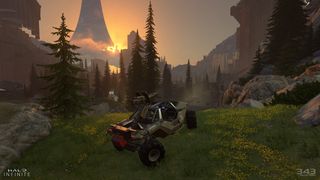 In a blog post following the Xbox Games Showcase event, Halo Infinite developers 343 Industries discussed a number of things, including new enemies, the open-world, and even the PC community, but what stuck out the most was the promise of post-launch updates.

The Halo Waypoint blog post reads: "We are also designing Halo Infinite to grow and evolve over time so we can continue to deliver experiences to our players well beyond launch."

That specific blurb in the blog post could quite literally mean anything. But, if we read it verbatim, it means that 343 Industries is planning some post-launch DLC for Halo Infinite.

However, another way to interpret Halo Infinite growing and evolving over time is as a live-game service model similar to Destiny 2 or Fortnite where world events take place on the Halo array at specific times. It would be interesting but that's very unlikely considering the type of franchise Halo is.

Another possibility is simply from a multiplayer aspect. 343 Industries might not touch the campaign, but rather push out updates that allow the multiplayer to grow and flourish, which makes sense because multiplayer is one of the iconic staples of Halo.

Finally, 343 Industries could also be alluding to graphical updates. The paragraph surrounding the line about updates was dedicated to talking about the graphics of the game, like running the campaign at 60-fps ut p to 4K resolution. The last line, after it talks about Halo Infinite growing and evolving, reads:

"This is the most technically advanced Halo game ever created, paired with the most powerful console on the planet, allowing us to create the most vivid and immersive way to experience our universe."

What's certain is that there are a ton of possibilities for Halo Infinite's future.