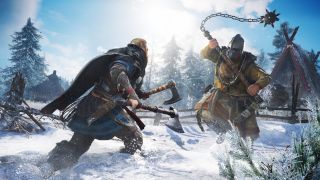 Narrative director of Assassin's Creed Valhalla, Darby McDevitt, took to the official Assassin's Creed Twitter to talk about how the writing team ensured a strong characterization for both the male and female versions of Eivor.

Here's what McDevitt had to say about how they pulled off a "coherent and complete" Eivor:

"We want our character, Eivor, to exist in a coherent space and have a coherent personality," McDevitt said. "So that by the time you get to the end of our game no matter which little paths you've taken through our game, you always feel that Eivor was Eivor."

"Whether you choose male or female, and both options are valid in our game, you will always feel that Eivor is coherent and complete," he added. "And I think the result will speak for itself. There's a lot of cool mystery and intrigue around the character Eivor, and we can't wait for you to dive into that mystery."

McDevitt promised a "coherent and complete" Eivor but still didn't get into the nitty and gritty details about how two Eivor's exist in the same canon (in Assassin's Creed Odyssey, you got the choice between a brother and sister).

Last month, McDevitt took to Twitter to say, "Both choices are canon, but we’re not going to spoil how we managed that trick until you play the game."