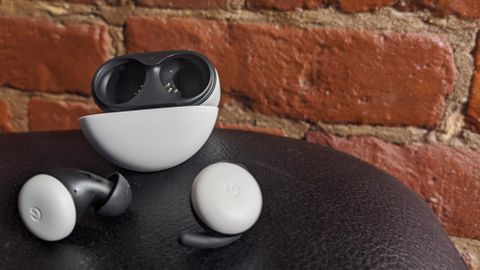 I love a good redemption story and the new Pixel Buds is currently my 2020 favorite. Back in 2018, the OG Pixel Buds launched to a lot of fanfare and hype, only to crash and burn in a sea of unfulfilled potential. Back Google’s back and the Pixel Buds are better than ever. First off, they’re actually wireless this time around. Next, they’re comfortable and sound good, not exactly on a par with the leading brands, but not far off either.

Best of all, at $179, it’s cheaper than most of the competition. However, music lovers looking for active noise cancellation will find themselves disappointed. But for the money and feature set, the new Google Pixel Buds has earned a spot on our best wireless headphones 2020 and best wireless earbuds 2020 pages.

The Pixel Buds are available today starting for $179. The Buds are available in four colors: Clearly White, Almost Black, Quite Mint and Oh So Orange. In the box, you get the earbuds, charging case, three pairs of eartips and the charger.

My first glance at the Pixel Buds made me want to yell out “The Freshmaker,” before dropping them into a bottle of Diet Coke. Those white, perfectly round matte earcups with look remarkably like Mentos if not for the G engraved in the center. But the black matte plastic casing with the eartip and earwing attached, lets me know the Pixel Buds are indeed truly wireless earbuds and not a candy dedicated to helping me overcome life’s minor inconveniences with unflappable cool.

Google calls the color of my review units Clearly White. With the black backing, it’s a handsome, unassuming pairing as is Almost Black. However, I think I’d prefer either Quite Mint or Oh So Orange in my everyday life. Both have a nice splash of color that’s a breath of fresh air with all the white AirPods and AirPods Pro.

Exercise buffs can get those gains without worrying about the Pixel Buds. The latest model has a IPX4 rating which indicates the earbuds are water and sweat resistant.

Twist, go and enjoy. That’s how simple wearing the new Pixel Buds is. Inserting the Pixel Buds involved holding the bud to my ear with the ear wing straight up. From there, I just twisted the bud counterclockwise into my ear until the wing sat comfortably wedged against my concha. And while I could feel the medium-sized eartips in my inner ear, neither bulged against my canal which allowed me to wear the buds for over two hours as I listened to music, called my folks and attended a video chat.

Move over AirPods Pro, there’s a new nearly instantaneously-pairing device in town. As soon as I popped the top on the Pixel Buds’ charging case, Google’s Fast Pair technology kicked in. A pairing notification popped up on the Pixel 4 XL. Clicking the notification took me to a tutorial that walked me through all the pertinent features of the buds including the embedded touch controls and digital assistant trigger phrases.

After the initial walkthrough, opening the lid on the charging case will automatically pair with the phone. And if you’re not a fan of Google’s Pixel phones, Fast Pair will also work with any device running Android 6.0 (Marshmallow) or higher or iOS. But with those devices, you’ll have to go through your normal Bluetooth menu to get everything set up. From there, you’ll get all that Fast Pair goodness. The Pixel Buds can be linked up to 6 devices at a time.

Placing the buds into my ears elicited a cheerful tone and let me know that everything was working as expected.

Google’s on to something here. This iteration of the Pixel Buds might be the best take on wireless earbuds touch controls I’ve had the pleasure of using. There’s just enough surface area to perform forward and backwards swipes to raise and lower the volume.

Best of all, is the tapping. Whether it was a single tap to answer/ignore calls or play/pause a track or double or triple tap to skip forward or backward on tracks, the physical act of tapping was extremely comfortable. That meant I wasn’t unintentionally driving the eartips deeper into my ear canal just to change tracks.

This day and age, it’s not enough for earbuds or even headphones to just be wireless. There has to be some features to set them apart from the pack. In the case of the Pixel Buds, you’ve got a few cool features starting with hands-free Google Assistant. Similar to the AirPods Pro, you can summon the Google Assistant using only your voice. A simple “Hey Google,” and the Assistant sprung into action ready to do my bidding.

Inevitably, you’re going to misplace an earbud no matter how careful you think you are. Thankfully, the Pixel Buds has a Find My Earbuds feature that will show the lost buds location or you can ring the bud, causing it to ring increasingly louder. It got enough for me to find the left Bud which inadvertently found itself lodged between my couch’s cushions.

Similar to the original Pixel Buds, the new model also works with Google Translate. Once the app is installed, you can use the Buds to converse in another language - kind of. Pressing down on one of the buds or saying “Hey Google, help me speak Spanish,” launched Google Translate on the Pixel in Conversation Mode. And just like that, anything that I said was instantly translated into Spanish and when I got tired of talking, it began translating “Untold Stories of the E.R., which was playing on my T.V. in the background. Switching the languages from Spanish to English and switching over to Telemundo, gave me a solid translation. Google Translate works with over 40 languages provided there’s a good Wi-Fi connection.

What I wish Google included is an adjustable equalizer so I can create my own custom sound.

Similar to the Samsung Galaxy Buds and the Jabra Elite 75t, the Pixel Buds lack active noise cancelling. Instead Google is relying on the rather tight seal the earbuds create to afford a measure of passive noise cancelling to shut out the outside world. And for the most part, it’s effective, that is until my boyfriend decides to come into the room singing off-key. Then I need to pump up the volume a bit.

But that’s not to say the Buds are completely free of ANC. The earbuds are outfitted with Adaptive Sound which is the aural version of adaptive lighting on your smartphone. That means when the Pixel Buds automatically adjusts the volume on the Pixel Buds in relation to my environment. So when I went from my quiet bedroom to washing dishes and cook prep, the volume increased slightly to account for the noisier environment. And once the noise subsided, the volume decreased.

The volume adjustment is rather subtle in that it increases/decreases just enough to gently shut out the noise. So don’t expect the volume to go from 40% to 60%, it’s more like a 50 to 52% situation, enough that you’ll notice a difference, but not markedly so. It’s not nearly pronounced as actual ANC that you’ll find in the AirPods Pro.

That meant when I listened to Luther Vandross’ “If Only For One Night,” the low-end was clean. I could easily hear every bit of the track including the delicate tinkle of the wind chimes and triangle in the background and Vandross’ legendary silky-smooth range was front and center, the presentation wasn’t as forward on the AirPods Pro.

The Pixel Buds sounded the best during Santana’s “Europa (Earth’s Cry Heaven’s Smile). The artist’s electric guitar was full and rich. The generous soundstage also allowed the organ to breathe and I could even hear the applause of the live audience. However, due to the fuller soundstage, the AirPods sounded better overall.

I also listened to a few 8D audio tracks including “Love Lies” by Kahlid & Normani and was impressed by the precision of the spatial audio effect as the instrumentals and vocals seemed to rotate seamlessly in a virtual 360-degree space. The AirPods Pro performed just as well, but was louder similar to my other test tracks.

Google claims the Pixel Buds can last 5 hours on a charge if you’re just listening to music, 2.5 hours if you’re chatting it up. I did a mix of the two over the course of several days and got an average of 4:27 before I had to put them back in the case for a charge. In all of my tests, I noticed that the right bud tended to drain faster than the left. I’m not sure if this is because as a right-handed person, the right bud was getting the most taps, but the difference is notable.

The Pixel Buds use Bluetooth 5.0 to connect to all your gadgets, which means a pretty stable connection. The buds maintained connection with the Pixel 4 XL even though I left the phone upstairs when I went downstairs to work out. I even managed to go into my backyard to get a little fresh air with no audio drop out.

I gave the Pixel Buds’s pair of beamforming microphones a serious workout during my testing, alternating between video and voice calls. And everyone that I spoke to reported clear, loud audio without any echo. When I spoke to my mom, the sound was so clean, I heard my niece in the back watching Arthur. And when I took a walk around the neighborhood, she didn’t hear any wind interference.

Google’s redeemed itself with the new Pixel Buds. A truly wireless pair of earbuds that live up to the promises of the original Buds and then some. The Buds are immensely comfortable and offer a smidgen of durability with its sweat and water resistance. And with a selection of solid colors, the $179 buds are even a little fashionable. But outside of the aesthetic, the earbuds offer great audio quality with a host of cool features such as real-time translation.

However, I’m hoping that the next model of the Pixel Buds will include ANC as there is a clear difference between active and passive noise-cancellation. For now, if you want the best in ANC truly wireless earbuds, you’ll want to look at either the $249 AirPods Pro or the $229 Sony WF-1000-XM3. But if you’re searching for a pair of attractive, affordable truly wireless earbuds, you can’t go wrong with the Google Pixel Buds.