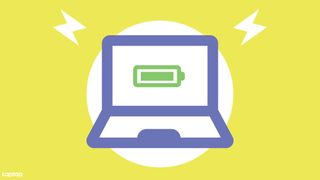 "Uh huh, sure!" we say sarcastically when a laptop brand boasts about its product's "spectacular" battery life. Forgive us at Laptop Mag for being skeptics — if you've been testing a crapload of laptops that rarely lived up to their battery life hype, you'd be a cynic, too.

Many laptops we've reviewed claimed to have astronomical battery life. Unfortunately, most of the time our lab tests showed that these laptops stay alive for just a fraction of their advertised run-times. Lenovo, for example, claimed that the ThinkPad P72 had an extraordinary 18-hour battery life. But our real-world test found that the laptop tapped out after just 4 hours. Boo!

Before the laptop brands "@" us, we understand that battery life can vary based on various testing methods and different configurations. This is why we allow a 2.5-hour window for those discrepancies. However, once laptop brands start claiming that their products surpass 25 hours of battery life — and our real-world testing reveals that the laptop lasts only a few incy-wincy hours — companies start tip-toeing into "exaggeration" territory.

By the way, only one laptop has reached 16 hours on the Laptop Mag Battery Test, which involves continuous Web surfing over Wi-Fi at 150 nits of brightness. (Check out our laptops with the best battery life list.)

How they test vs. how we test

MobileMark 2014 (MM14), created by BAPco, was the most popular industry-standard battery life metric used by brands last year despite there being a more current benchmark (MobileMark 2018). MM14's benchmark isn't as demanding as ours — we both require devices to be set at 150 nits of brightness, but only our test requires the device to be connected to Wi-Fi.

That being said, the major discrepancies in battery life we've observed (marketed claims vs. our real-world results) impelled us to do a report revealing the inflated marketing claims of many laptop brands while also praising the few companies that have been surprisingly spot-on with their battery life advertisements. We analyzed every laptop we reviewed in 2019 and researched which brands' battery life advertisements came closest to our real-life testing — and which were far off the mark.

Let's start with some good news! Not all laptop brands have been spewing tall tales about their products' battery life. Apple and Microsoft are the top two companies that made battery life claims that were closest to our real-world test results.

Apple knocked it out the park with an impressive eight out of nine products that matched our battery life results; in other words, 88% fell within our permitted 2.5-hour window. In some cases, our battery life results surpassed Apple's advertised battery life claims. For example, the 15-inch MacBook Pro — and it's updated version with a 9th-gen processor — both claimed to survive for 10 hours. So imagine our delight when our lab results discovered that both devices persevered for about 10 hours and 20 minutes.

The only Apple product that didn't live up to the tech giant's battery life claim was the MacBook Air (2019) — the device conked out after 8 hours and 51 minutes in our testing, while Apple advertised it would last for 12 hours. Still, this minor blemish doesn't take away from the fact that Apple's battery life advertisements were the closest to our results — the Cupertino-based company lands in the No. 1 spot as far as being right on the nose with how long its laptops can survive without life support.

On average, Apple's advertised battery life was askew from our real-world testing by only 48 minutes.

Let's also give a round of applause for the laptops that surprised us because they exceeded their battery life claims in our lab. Three Apple products — the 13-inch MacBook Pro (2019), plus the 2018 and 2019 versions of the 15-inch MacBook Pro — surpassed their advertised 10-hour battery life.

Dell’s XPS 13 2-in-1 also exceeded its battery life claim (10 hours and 50 minutes) by 7 minutes in our real-world battery life test.

As for Microsoft, the best way to describe my analysis of this laptop brand's battery life advertisements is "almost is never enough." Many Microsoft laptops were close to making the 2.5-hour window, but not close enough.

For example, Microsoft claimed that its Surface Pro 7 could last for 10.5 hours, but our lab results discovered that the device could stick around for only 7 hours and 52 minutes. This product missed our permissible 2.5-hour window by 8 minutes, so we had to flag it as a mismatch with our real-world battery test results. All six of the laptops we reviewed had several close calls similar to this one.

Microsoft is in second place, but most definitely a far second from Apple's 48-minute average. Microsoft was off from our lab results by an average of 194 minutes, which is 3 hours and 14 minutes.

Only one laptop landed in the same ballpark as our battery test — the 15-inch Microsoft Surface Laptop 3 for Business (with Intel). The device was advertised as being able to stay powered for up to 11.5 hours, which falls within our 2.5-hour window since our battery life results came back with 9 hours and 32 minutes.

Interestingly, Apple and Microsoft did not use the MobileMark 2014 metric; both companies used their own internal testing benchmark to estimate battery life run-times.

HP's and Lenovo's estimates were the furthest from our lab results. On average, HP was askew by 251 minutes (4 hours and 11 minutes), while Lenovo was off-kilter by 231 minutes (3 hours and 51 minutes).

The remaining seven products were flagged, but there was one battery life claim that is so outlandish, we have to point it out. HP gave the 13-inch HP Spectre x360 an absurd 22.5 hours of estimated battery life, while our real-world test results showed that the laptop could last for 12 hours and 7 minutes. That's still really, really good; it’s just far short of the advertised claim.

As for Lenovo, out of 18 laptops we reviewed, only six (33%) fell within our permitted 2.5-hour window as a match with our real-world test results while the other 12 were flagged. The ThinkPad P72 took the throne as having the wildest battery life claim. It was advertised as having 18 hours of battery life, but conked out after just 4 hours and 19 minutes!

Lenovo and HP used the MobileMark2014 benchmark for almost all of the products we reviewed last year.

We analyzed all the laptops we reviewed in 2019, omitting laptops that did not advertise battery life. We also excluded laptop brands that did not have at least six reviews. For example, although we reviewed the Pixelbook and Pixelbook Go last year, that sample size is too small to include in our findings, so we removed Google from our list.

Some brands ran several battery life tests on the same laptop. For example, Dell XPS 15 ran two battery tests: one with productivity apps and another with Netflix streaming "with display brightness set to 150 nits (40%) and wireless enabled," as Dell wrote in its fine print. We selected Netflix streaming in this case, which requires web consumption, as it is closest to our Wi-Fi-based testing.

This report isn't meant to call out companies for deceptive marketing tactics. Instead, this analysis is calling for laptop brands to ditch the obsolete MobileMark 2014 testing method.

BAPCo updated its MM14 battery life metric with MobileMark2018 by increasing its screen brightness requirement to 200 nits, but the test still doesn't demand that laptops be connected to the internet. Among the laptops I've analyzed, not one device manufacturer used MobileMark 2018 — or more demanding battery life benchmarks — to estimate run-times. The question is, why?

PC makers may be opting for MobileMark 2014 instead of choosing a metric that mirrors real-world rigors because it's better for marketing — using a low-pressure test can help manufacturers fluff up their battery life claims to win over consumers.

But for some of the laptops we reviewed, fluffing was unnecessary. The Asus ExpertBook B9450 boasted up to 24 hours of battery life, but our test results showed the laptop lasted 16 hours and 42 minutes, making it the longest-lasting laptop we've ever tested –– no embellishment needed.

I found it interesting that the companies that were closest to our real-world test results — Apple and Microsoft — didn't use the MobileMark method at all. According to the company's 16-inch MacBook Pro page, Apple tests its products' battery life by putting the laptops through wireless web browsing while surfing 25 popular websites, as well as playing some Apple TV. Microsoft also used its own in-house battery test by using a metric that combines Wi-Fi connectivity, office productivity and web browsing through eight popular websites.

Perhaps it's time for other companies to follow suit in ditching MobileMark for a more demanding metric. Yes, I know laptop makers want to sell laptops, which is why their battery life claims can be so "out there." But I'm pretty sure companies don't want their Amazon review section littered with dissatisfied customers saying, "Don’t buy! Battery life doesn't live up to the hype!"

Sure, you’ll attract a wave of buyers with the exaggerated battery life claims at first, but the mania will taper off as disappointed feedback about the laptop's anticlimactic battery life casts a dark cloud on the offending brand's reputation.