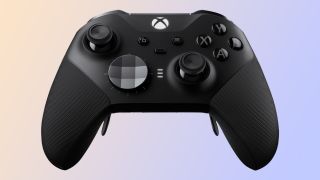 Many PC gamers firmly believe that playing video games on a computer with the keyboard and mouse is the best way to go, but there are plenty of folks who see value in using traditional controllers.

After all, traditional controllers, let you more easily access the buttons you need to press in order to control the characters onscreen. Better yet, they often come with extra features that make them even more appealing.

But like everything else in the gaming world, not all PC controllers are made the same. And in some cases, your mileage will vary, depending on how much you’re willing to spend and which controller you choose.

So, if you’re looking for a new PC controller, read on: The following accessories are great choices for any novice and serious players alike.

If you don’t mind spending serious cash on a new controller, consider the original Xbox Elite Wireless Controller. The controller looks like a standard Xbox controller, but has swappable components and Hair Trigger Locks, so you can customize it to fit your play style and maximize your effectiveness. When you buy this controller, it comes bundled with a carrying case, four paddles, six thumbsticks and two D-Pads that let you to customize the controller how you see fit. But beware: It costs $235.

The Xbox Elite Controller Series 2 is just as it sounds — the second-generation of Microsoft’s popular Elite controller. The device comes with a carrying case, six different interchangeable thumbsticks and four paddles of various  sizes. Add to that two D-pads and a thumbstick-adjustment tool, and it’s a fully customizable controller. Best of all, it offers up to 40 hours of battery life on a single charge. This controller costs $180.

Microsoft’s Xbox One Controller comes with a nearly identical design to the Elite versions, but without all of the tweaks that you can take advantage of in the more expensive models. That said, the device has a comfortable design and works via Bluetooth with your PC. And since it has a textured grip design, the thing shouldn’t slip from your hands or cause problems if your they are sweaty. The Xbox One controller costs $46.

Although Sony doesn’t do much in the PC-gaming market, the company’s DualShock 4 controller can connect to your computer via Bluetooth. Be aware, however, that you may need to use a third-party app, like DS4Windows, to get it to work on a Windows machine. Once it’s set up, you can use the controller just as you would on a PlayStation 4. That said, the controller’s audio jack doesn’t work with PCs, so keep that in mind. The DualShock costs $44.

If you haven’t heard of Astro Gaming’s products, you should check them out. The company offers some of the most-respected controllers on the market, thanks to their outstanding ergonomic design and the ability to map buttons based on the game you’re playing. This ensures that you can always place your most important controls in the perfect spot. You can also swap out the analog stick and D-pad modules, and get the perfect triggers. A headphone jack is compatible with any gaming headset. All that for $180.

Most of the controllers in this roundup are designed for professional users who aren’t on a budget, but the Logitech F310 is quite the opposite. It sells an affordable $15, and offers simple USB plug-and-play compatibility with any Windows machine. Although it’s cheaper than many other controllers, the F310 has 10 programmable buttons and eight-way programmable D-pad support, so you can customize your experience just the way you like it.

If it’s customization you’re after, going with the SCUF Vantage 2 is your best move. The controller is fully customizable, allowing you to use only the parts you want to get the most out of your gaming experience. And SCUF is quick to note that the company’s “exclusive” paddle design makes it easier to play first-person shooters and other games that use it. In total, the SCUF Vantage 2 supports more than 60 removable magnetic faceplates and parts. The controller costs $200.

If you’re looking for a controller that won’t break the bank, the 8BitDo SN30 Pro is a good place to start. The device features wireless Bluetooth and USB-C connectivity, D-pad and X-input functionality and rumble variation and motion controls. The Pro  won’t, however, deliver all of the customization you’ll find elsewhere. That said, at $45, it’s very affordable and one of the best values in this roundup.