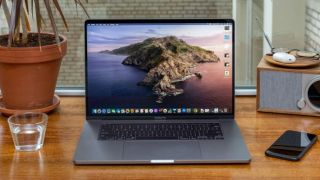 Apple's famed quality control just took another hit. While the new 16-inch MacBook Pro ditched the unreliable Butterfly keyboard, the powerful machine appears to be plagued by other issues.

Here is what we know about them, and whether you should be concerned.

Early adopters of the 16-inch MacBook Pro are complaining about repeated popping or clicking sounds coming from the laptop's speakers. As AppleInsider points out, the problem surfaces when you stop a song or video, skip to another part, or close the tab where the sound is coming from. The grating, high-pitched popping is similar to the noise produced when you first turn on a pair of speakers.

In this YouTube clip, you can hear the strange clicking sound as the MacBook Pro user skips around the video they're watching.

While some expected there to be compatibility issues with certain programs, the speaker problems has been replicated across multiple apps, including Final Cut Pro X, Logic Pro X, QuickTime Player, YouTube, Soundclick and Safari.

Fortunately, the issue appears to fixable. MacRumors obtained an internal Apple document that tells Apple Authorized Service Providers not to replace laptops because the popping sound is software related (which means it can likely be fixed via an over-the-air update).

"A fix is planned in future software updates. Do not set up service, or replace the user's computer, as this is a software-related issue," Apple wrote in the memo.

But the problems don't stop there. 16-inch MacBook Pro users are also reporting significant display ghosting, or when artifacts linger on a screen. Typically caused by slow response times, this undesired effect gives users the perception that images are blurred or smeared.

A lengthy forum post on MacRumors suggests the problem is widespread. Ghosting is an inherent shortcoming of any display, but multiple users say they don't notice the same screen ghosting on their older 13-inch and 15-inch MacBook Pro laptops when compared to the new 16-inch model.

Customers who posted videos and images of the ghosting problem are running the MacBook Pro display at 60Hz, or the maximum refresh rate. And yet, ghosting is reportedly more noticeable on the MacBook Pro's display despite it operating at the same refresh rate as most other laptop panels.

Not everyone is bothered by the display. While some users have threatened to return their new MacBook Pros, others don't notice any text trailing --- a common indicator of ghosting.

Apple hasn't acknowledged the ghosting complaints, and we didn't notice any blurring in our 16-inch MacBook Pro review. In fact, we praised the detailed panel for its delightful image quality.

Still, the 16-inch MacBook Pro is a very expensive machine and customers shouldn't have to worry about its reliability, especially those who held out for a MacBook without the troubled Butterfly keyboard switches.

Let's hope Apple pushes out a software update for the audio issue soon, and that a similar solution can fix the display ghosting.