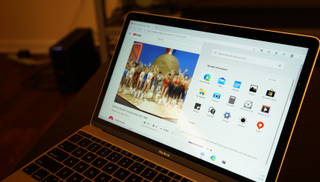 Earlier this week, Microsoft released the first emulator for Windows 10X, giving the public its first glimpse at the upcoming operating system. It only took a few days for some wizard to get it running on a Mac.

Twitter user and independent dev @imbushuo (who goes by Ben) posted a video of the operating system running on his MacBook, and it seems to perform surprisingly well. You can check out this fine work in the tweet below.

As you can see, Windows 10X is running on a 12-inch MacBook with an Intel Core m3 CPU and 8GB of RAM. Incredibly, most of the drivers work as advertised, including those for the touchpad (even gestures work!).

While this strange Windows 10X + MacBook mashup is a fun idea, it's not a practical one for Apple laptop users. As the dev notes, some tricks were needed to get the emulator on a Mac, but that finagling ultimately made the image unserviceable.

Microsoft is set to launch Windows 10X this fall, so it created and released an emulator earlier this week for devs to test and optimize their apps.

The emulator is available on Microsoft's dev tools site if you want to give it a try.