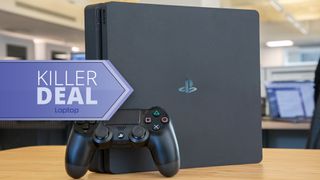 Early Cyber Monday deals are flooding through the gates, and right now you can get a PlayStation 4 Slim 1TB with three games for just $200, which is the best PS4 deal we've seen so far. Sure it's not one of the best gaming laptops around, but it's a great, cheap alternative.

Sony PS4 Slim 1TB: was $299 now $199 @ Amazon
Amazon has the PS4 Slim console for sale at an all-time low price of $199 with three awesome games: God of War, The Last of Us Remastered and Horizon Zero Dawn. If it's out of stock at Amazon, check Walmart and Best Buy.View Deal

The PS4 Slim comes with three amazing games: God of War, The Last of Us Remastered and Horizon Zero Dawn. You won't find another deal like this on the PS4 until probably next Black Friday or Cyber Monday, but at that point, the PS5 will likely be out.

If you want to pick up a PS4 and burn through these top titles, it's either now or never. There's backwards compatibility on the PS5, but that's going to be close to $500 when it launches. This deal won't last very long, as it has been slipping in and out of stock all week.

If this is not what you're looking for, take a look at our Cyber Monday deals hub to see what other hot products are pouring in.