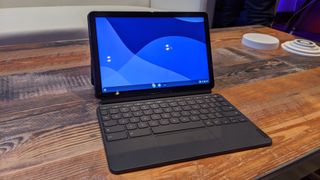 We had the pleasure of getting a hands-on  with the Lenovo Chromebook Duet at CES 2020. Now, the highly anticipated Chromebook is now available for pre-order at a shocking, under $300 low price at Best Buy.

If the Lenovo Chromebook Duet was spotted the wild -- perhaps during a daily commute or in the arms of a student rushing to class -- many, without question, would assume that it's an innocuous little gray-black book.

But holy mackerel, imagine the surprise on observers' faces when they watch that book transition into a laptop. The Lenovo Chromebook Duet is a detachable, 2-in-1 that can transform into laptop from a tablet with the easy-as-pie attachment of the accompanying keyboard and a smooth-feeling kickstand cover.

I have the Lenovo Chromebook Duet in my hands as I write this, and I am adoring its magnetic, removable gray cover, which is reminiscent of an urbane twill suit, that sports a hidden kickstand that can be tucked away when it's not in use. There's also a circular cut out on the cover so it does not block the tablet's camera.

The tablet itself weighs just 0.9 pounds and sports a dimension of 9.4 x 6.3 x 0.3 inches,. The Lenovo Chromebook Duet is super-slim and light -- perfect for an on-the-go, Google productivity user.

The Lenovo Chromebook Duet is also compatible with USI Stylus pens, which might appeal to those who love sketching or taking notes.

The Lenovo Chromebook Duet is scant on ports and features one USB type-C port on the right side of the device that you can use for charging.

The Chromebook Duet's display struts around with a 10.1-inch, 1920 x 1200 display, which Lenovo claims can output 400 nits of brightness, which makes it quite a brilliant display.

The Chromebook covers 70% of the sRGB gamut, which is expected from a non-premium device, but to the naked eye, the display seems vibrant and bright.

The edge-to-edge, gray detachable keyboard had a satisfying, clicky feel to it when I tapped away on the deck; the keyboard features 1.3 millimeters of key travel. The only downside is that, because the Chromebook is so small, you may feel awkwardly cramped as you plug away on this laptop.

Some keys are also half their size on this keyboard, so there is a little bit of a learning curve when it comes to becoming accustomed to typing on the Lenovo Chromebook Duet.

The touchpad feels pleasant to the touch and is impressively responsive.

Lenovo claims that the Chromebook Duet can offer up to 10 hours of battery life, but the company may actually be underselling its device's longevity. I just checked in with our lab tester, and the Chromebook Duet hit 12 hours and 46 minutes on our battery test.

Intel and AMD CPUs aren't featured on the Lenovo Chromebook Duet, which is expected due to its economical pricing. The lightweight 2-in-1 comes equipped with a Mediatek Helio P60T processor, an ARM G72 MP3 graphics card, 4GB of RAM and up to a 128GB eMMC.

The Chromebook Duet also features two speakers as well as dual-array microphones. There's two cameras: one on the front that is 2MP and an 8MP rear camera. Testing the cameras, they're nothing particularly mind-blowing, but the duo gets the job done.

We're going to put this lightweight 2-in-1 to the test and see how well it competes with other Chromebooks of its ilk.

At CES, we predicted that the Lenovo Chromebook Duet could potentially land on our best Chromebooks page, and we're anxious to see if this ultraportable device will live up to our expectations once it hits our lab. So far, we know that this stellar Chromebook surpassed its 10-hour battery life claim with nearly 12 hours of longevity, but stay tuned for our full Lenovo Chromebook Duet review to get an in-depth look of this device's benchmarks.

One thing is for sure, Lenovo Chromebook Duet certainly lives up to its name with its book-like appearance. Travelers, commuters -- and anyone else who's on-the-go -- will appreciate this Chromebook's tiny footprint as they hop from A to B without the burden of a heavyweight laptop.