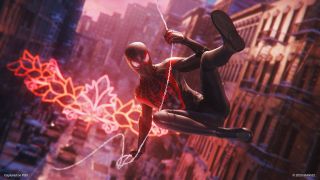 Insomniac Games has revealed that Spider-Man: Miles Morales will release with an optional 4K/60fps performance mode aimed at providing a more fluid experience with higher frame rate (via TechRadar).

When a fidelity mode is present in a game, we can expect a focus on graphical fidelity at the cost of a lower frame rate. Insomniac Games has yet to confirm what will make this mode so demanding, but the answer likely lies with ray tracing.

Swing through the city like never before on PS5 with an optional 4K / 60fps Performance Mode. #MilesMoralesPS5 #SpiderManPS5 pic.twitter.com/FhPEPLjnKLJuly 20, 2020

Ray tracing is a relatively new real-time rendering system that tracks the way light bounces off surfaces. It's been praised and awed at ever since it was revealed, allowing for far more realistic lighting and reflections within game worlds. However, it's notoriously demanding, which is why Spider-Man: Miles Morales might have its fidelity mode focused on ray-tracing at 30fps.

Some consumers might be disappointed to know that they still have to worry about 30fps with the PlayStation 5, but the inspiring beauty of ray tracing should convince them it's worth it. If you want to see the power of ray tracing in action, check out how it looks in Minecraft.

Performance modes seem to be a growing trend in this next generation for the PlayStation 5, with games like Demon's Souls being confirmed to have two settings, one focused on fidelity and another focused on frame rate.

Insomniac Games is also developing Ratchet & Clank: Rift Apart, but we currently have no indication of whether or not it will include a similar performance mode. It's probably safe to expect many other PlayStation 5 titles will have ray-tracing as an option at the expense of frame rate, but this hasn't been officially confirmed.