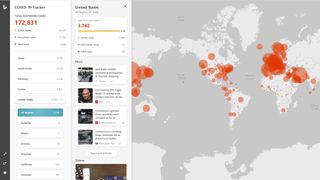 Microsoft just launched an interactive Bing map that's intended to keep you up to date on all of the news surrounding the novel coronavirus. The map details how many active, recovered and fatal cases that are going on around the globe. If you select a specific country or state, it'll break down the results for that specific area, and a sidebar will pop up to reveal several articles and videos.

Within the COVID-19 Tracker, it says that all of the data is pulled from the US Centers for Disease Control and Prevention (CDC), World Health Organization (WHO), the European Centre for Disease Prevention and Control (ECDC), and Wikipedia. It's unclear how often the tracker is updated, but at the time of writing I noticed that it updated just before one hour was up.

The virus can spread rapidly through the close interactions New Yorkers have in restaurants, bars and places where we sit close together. We have to break that cycle. Tomorrow, I will sign an Executive Order limiting restaurants, bars and cafes to food take-out and delivery.March 16, 2020

While the numbers of cases seem to be accurate with the WHO's count, unfortunately, it doesn't seem like Bing is pulling the most relevant and up to date news. When I pulled up the New York tab, there was no mention about Mayor Bill de Blasio shutting down bars, restaurants and cafes starting March 17 in New York City.

Apparently, The Verge experienced some even wonkier things, like an old video popping up in the United Kingdom that stated that there weren't any confirmed cases in-country yet, despite there being 1,391 cases in the UK.

While Bing's news may be out of date, you don't have to rely on the service to stay up to date. Google said that it'd be rolling out an initial version of a similar website late Monday, March 16, so stay tuned for more information.