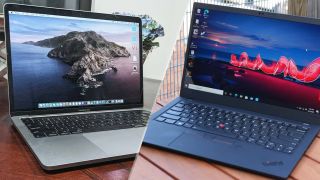 If there is a laptop worthy of converting the most diehard macOS fans, it's the Lenovo ThinkPad X1 Carbon. Built like a tank yet slim and sleek, the X1 Carbon delivers much of what so many people love about the MacBook Pro -- a premium design, fast performance and long battery life -- in a Windows 10 notebook.

Both of these laptops are excellent options for researchers, business users or frequent travelers who need something that feels premium and is portable yet powerful. Unfortunately, these laptops aren't cheap, so you might not have the budget to buy both of them. Don't worry, though. We're going to run through each category we look at when we review a lot to determine whether the ThinkPad X1 Carbon or the MacBook Pro is the right laptop for you.

They look distinct and even use different materials, but the MacBook Pro and ThinkPad X1 Carbon are alike in their portability and outstanding build quality.

The extra weight is accounted for by the MacBook Pro's unibody aluminum design. It feels sturdy and high-grade, like something that will pass the test of time. The same goes for the ThinkPad X1 Carbon, except it uses carbon-reinforced plastic and lightweight magnesium alloy. It might not feel as convincing, but don't be fooled, the X1 Carbon is MIL-STD-810G certified, which means it can withstand extreme conditions.

The X1 Carbon has relatively slim bezels on three sides of the display, something we're still waiting for Apple to adopt on the 13-inch MacBook Pro. The ThinkPad X1 Carbon has an understated design with stealthy matte-black finishes and an optional carbon fiber weave pattern on the lid. Red accents on the pointing stick and left-and-right click buttons add a touch of color to the inky surfaces.

In contrast, the MacBook Pro is a slab of aluminum in Silver or Space Gray colors. On the lid is a dark Apple logo while on the deck you'll find upward-firing speakers flanking a black keyboard. It's a simple, clean design that has stood the test of time, but we're hoping for updates the next time around.

The ThinkPad X1 Carbon has a fingerprint sensor and optional IR camera for Windows Hello login whereas the MacBook Pro has only Touch ID.

The X1 Carbon has a much better selection of ports, and it's not even close.

On the right side of the ThinkPad X1 Carbon is a USB 3.1 Type-A port and a lock slot. On the left side, you'll find two Thunderbolt 3 inputs, an Ethernet extension port, an HDMI 1.4, a headphone jack and a second USB 3.1 port.

The MacBook Pro has four Thunderbolt 3 ports and a headphone jack when you get the upgraded model. The base version still has only two Thunderbolt ports.

These are both great laptops for consuming media and creating content thanks to their bright and vivid displays. The MacBook Pro has a single display option: a 13.3-inch, 2560 x 1600-pixel panel. Lenovo gives you some flexibility by offering the ThinkPad X1 Carbon's 14-inch screen in 1080p, 2560 x 1440-pixel, and 4K variants.

I tested the  FHD and UHD panels on the ThinkPad X1 Carbon and enjoyed the vibrant hues and detailed images while watching YouTube and streaming my favorite shows. The MacBook Pro's display fits somewhere between those screens in terms of quality, falling short of the ThinkPad's 4K panel but outclassing the 1080p screen.

According to our colorimeter, the 4K and 1080p displays available for the ThinkPad X1 Carbon cover 135% and 101% of the sRGB color gamut, respectively. Capable of covering 114%, the MacBook Pro's display is more colorful than the ThinkPad's FHD screen but duller than the 4K one.

We saw similar results in our brightness test. The 1080p X1 Carbon hit 364 nits of brightness whereas the MacBook Pro reached 485 nits. The 4K panel on the X1 Carbon outshone both laptops, at 498 nits.

If you'd asked me which laptop had the better keyboard a year ago, I wouldn't have batted an eye. But now that Apple replaced the awful Butterfly keyboard with a more traditional Magic keyboard, it's a closer contest. Still, the new keyboard on the MacBook Pro is no match for the class-leading one on the ThinkPad X1 Carbon.

The Carbon's backlit keys offer deeper travel than those on the MacBook Pro and they deliver a satisfying tactile click. There is a meatiness to them that isn't quite replicated on the Magic Keyboard. Don't get me wrong, the Magic Keyboard is a huge improvement as we unanimously determined in our side-by-side typing test between it and the Butterfly keyboard. The scissor-switches have deeper travel and feel cushier against your fingertips. Oh, and they don't fail to register letters.

The MacBook Pro shoots back with a gigantic touchpad that dwarfs the one on the ThinkPad X1 Carbon (3.9 x 2.2 inches). Both glass touchpads are responsive but there is something satisfying about having all the extra space. If, like me, you prefer real buttons to the simulated Force Touch on the MacBook Pro, then add another point in the X1 Carbon column.

Of course, if you use a pointing stick instead of a touchpad, then the X1 Carbon, with its red rubber TrackPoint nub, is the only choice here.

We reviewed two X1 Carbon models, one with an Intel Core i5-10310U vPro CPU with 8GB of RAM and a pricier unit with a Core i7 vPro CPU and 16GB of RAM. I'll include both versions in this section but use the Core i5 model for comparison because it costs about as much as the MacBook Pro (Core i5 CPU, 16GB) we tested.

Those scores translated to our Handbrake video-editing test in which the Core i5 ThinkPad X1 Carbon (19:51) and the Core i7 (18:29) nearly matched the premium laptop average (18:25) but were absolutely trounced by the MacBook Pro (12:43).

The X1 Carbon fell even further behind on our hard drive test. The 256GB PCIe SSD in our cheaper model duplicated 5GB of multimedia files in 6 seconds for a transfer rate of 783 megabytes per seconds, and the 512GB SSD config did it in 5 seconds for a rate of 997.9 MBps. Those are excellent scores but they can't match the 512GB SSD in the MacBook Pro, which reached a record-shattering 2,060.2 MBps read time on the Blackmagic benchmark.

Graphics performance is a weakness for both laptops but, once again, the MacBook wins this category thanks to its integrated Iris Plus GPU. It stuttered through Sid Meier's Civilization VI: Gathering Storm, playing at just 18 frames per second. And yet, it ran smoother than ThinkPad X1 Carbon, which glitched at 8 fps.

If you upgrade the X1 Carbon to a 4K panel, you can expect a runtime of only 7 hours and 23 minutes.

The X1 Carbon scored the most points in this face-off but that doesn't necessarily mean it's the right laptop for you. Operating system differences aside, the X1 Carbon crafted its lead against the MacBook Pro thanks to its wide range of ports, outstanding keyboard and lightweight yet durable design.

However, the MacBook Pro wins in other critical areas, including performance and value. Yes, the MacBook Pro is a very expensive laptop but the latest ThinkPad X1 Carbon has a higher starting price and can only be configured with 16GB of RAM (vs 32GB) and 1TB of storage (vs 4TBs). So if you need the more powerful laptop, go with the MacBook Pro. For the most well-rounded notebook, get the X1 Carbon.