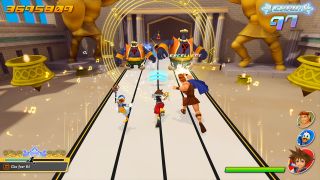 The former is a rhythm game that's coming to the Xbox One, PS4 and Nintendo Switch, while the later is a turn-based mobile game coming to Android, iOS and Amazon.

Unfortunately, there isn't an English trailer out just yet, but I'm sure someone on the internet has translated it by now.

While Kingdom Hearts: Melody Of Memory and Kingdom Hearts Dark Road seem like spin-off games, I wouldn't be surprised if they had important plot points in the story that pertains to the overarching series.

I'm not going to pretend to understand the convoluted story-structure that is Kingdom Hearts. However, from what I gathered, Kingdom Hearts: Melody Of Memory will have you dive into Kairi's memories, hence the name, to help her remember everything she's forgotten.

Kingdom Hearts Dark Road got an official release date of June 22 in the trailer. It seems like you'll be able to access this game from Kingdom Hearts Union Cross' startup screen as if it were an expansion.

We'll likely learn more about these Kingdom Hearts games when official English trailers launch for them in the near future, so stay tuned.