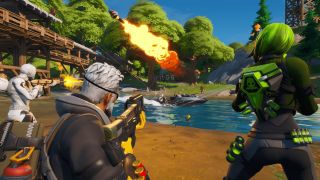 While it's possible that the Xbox Series X and PS5 may be short on launch titles, having the most popular game in the world available at launch should help take the sting out of that shortage.

Epic has announced today that Fortnite will be available on both next-gen consoles at launch (via Engadget).

It's hardly the newest game out there, but Fortnite's popularity hasn't wanted yet and console gamers won't want to abandon it when they move to Xbox Series X and PS5.

While Epic has not yet confirmed cross-platform support on next-gen consoles,  it's safe to assume the more platforms the merrier attitude will carry over to the Xbox Series X and PS5, especially considering current cross-console support.

Fortnite is moving to Unreal Engine 5

While the news that Fortnite is coming to Xbox Series X and PS5 at launch is certainly welcome, Epic also announced that the game would be moving to Unreal Engine 5 in 2021. The company recently offered up a tech demo of the platform on PS5 hardware and you owe it to yourself to check it out.

Now I wouldn't bet on Fortnite moving to the hyperrealistic look found in that demo, but it shows you the power of that platform. It will be interesting to see how Epic leverages it for the colorful and frenetic universe of Fortnite.