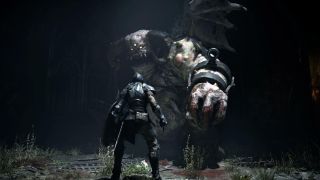 Yesterday, Sony blew us away with a conference full of incredible games, but personally, I returned from this dazzling experience most excited for the long-rumored Demon's Souls remake. My excitement has only grown since then now that there's strong reason to believe it's more than just remake, as Pete Dalton, the chief technology officer at Bluepoint Games, hinted at in a 2019 blog when describing the Shadow of the Colossus remake.

This is definitely referring to Demon's Souls, and since we know the game is "completely rebuilt from the ground up," we likely have a lot to expect from this re-envisioning, not just the same areas within the same game. It's hard to be patient for what new things we might see here, but for now, we have a few theories.

After the development of Demon's Souls, an entire area was unfinished and unreleased. The shattered Giants Archstone simply sat in the middle of the Nexus, never touched or acknowledged throughout the original game.

Thanks to various YouTubers, we learned that this was actually meant to be a location called the Land of the Giants. However, it never made it into the final product for one reason or another. It would be awesome if Bluepoint Games rebuilt this area and put it in as a love letter to all the fans who never got to see it ten years ago.

We're also hoping that Bluepoint Games can fix a variety of the original Demon's Souls issues, including magic being far too powerful and shields being the primary method of victory.

Another tidbit of information we have is this quote taken from the PlayStation Blog, "From JAPAN Studio and Bluepoint Games comes a remake of the PlayStation classic, Demon's Souls. This remake invites players to experience the original brutal challenge, completely rebuilt from the ground up and masterfully enhanced with a new 'Fractured Mode.' In addition to beautiful shadow effects and ray tracing, players can choose between two graphics modes while playing: one focused on fidelity, and one focused on frame rate. Coming to PlayStation 5."

To see a graphics mode focused on frame rate versus fidelity is great news, especially since Soulsborne games are notorious for needing those full 60 frames per second to realistically engage with any and all adversaries. It's always frustrating dying to something because your game wasn't moving fast enough.

And what's "Fractured Mode?" Perhaps it has something to do with the original game's World Tendency, where dying meant enemies and bosses got tougher and tougher. Alternatively, it could be referring to Truth Death mode, which was never released in the original game but has been confirmed to have existed within the original game files. It was rumored to act as a one-time death mode, just not as severe but rather with drastically increased consequences.

With these five screenshots, we see glimpses of the gorgeously remade tutorial area and parts of Boletarian Palace. A Twitter user going by @illusorywall did a great job of putting these screenshots side by side to showcase the drastic difference between the 2009 release and the new version.

Seeing this world phenomenally realized with modern graphics is beyond exciting, and as a die-hard fan of Demon's Souls, I am looking forward to this wholeheartedly.