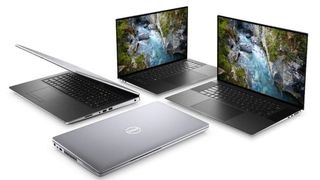 The Dell XPS 17 went from a hopeful rumor to a near-guaranteed product in just a few days -- and now we even have photo evidence of its existence.

Reddit user /WesolyKubeczek spotted a pair of mysterious laptops on a Dell Precision product page. Look closely and you'll see they look like larger versions of the redesigned XPS 13 2020. The photo has since been removed but not before our eagle-eyed hero took a screengrab.

So, which laptops are we looking at? These appear to be the upcoming XPS 15 and XPS 17 behind next-generation Precision (5500) and Precision (7750) workstations. These two laptop lines currently share the same chassis so it'd be interesting to see them move in different directions.

What excites me most are the top-firing speakers flanking both sides of the keyboard. One weakness of these typically excellent XPS laptops is their lackluster speakers, so I'm hoping the new speaker position signals improvements to audio quality.

Apart from those enhancements, the XPS 15 and XPS 17 have the same general design as their predecessors. The silver lid appears to be made of aluminum and the carbon-fiber weave returns to the deck.

There also appear to be four USB-C ports (expect at least dual Thunderbolt 3 inputs) along with an SD card slot and a headphone jack. Sorry, no more USB-A input for legacy peripherals.

This isn't the first time the rumored XPS 17 has surfaced online. Just last week, leaked benchmarks pointed to an XPS 17 with the new Intel Core i7-10750H CPU, a 6-core, 12-thread processor with a max clock of 5Ghz.

This came after a leaked roadmap showed the projected release dates of upcoming Dell products. Alongside a mysterious dual-screen device and XPS 13 2-in-1 was the XPS 15 scheduled for an April launch and the XPS 17 slated for a mid-2020 release.