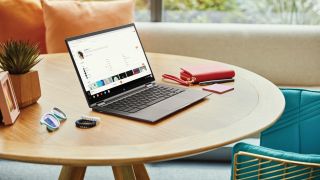 Modern Chromebooks can run Android apps and, thanks to the "Better Together" initiative started in 2018, there is some integration between the two platforms, however, the relationship between Google's two operating systems falls short of what is possible using the Windows Your Phone app with an Android device.

According to some new code changes discovered by 9to5Google in chrome://flags there are some significant improvements coming that will turn the integration between Chrome OS and Android into a first-class experience.

The new feature is identified as "Phone Hub" in the Chrome OS code, which, according to the description in the code, "Provides a UI for users to view information about their Android phone and perform phone-side actions within Chrome OS." The feature involves the phone connecting to your Chrome OS device via Bluetooth.

Unfortunately, the code doesn't elaborate on what "phone-side actions" will be available, but there were a few more additions to the code that gives us some further insight into what is possible.

The last piece is certainly the most interesting as Task Continuation suggests that you can simply be working on your smartphone and then sit down at your Chromebook and seamlessly pick up where you left off.

There are a lot of questions to be answered here though. Would any app, for Chromebook or smartphone, be able to support this feature? If it is Google phones and apps only, much like some of the Windows Your Phone features are Samsung phones only, that is significantly less compelling.

And as is always the case with these new additions to chrome://flags, it doesn't give us a real timeframe for the release. It would be nice if it could be delivered alongside the Google Pixel 5 launch that would traditionally happen in mid-October, but given that this is the first indication we've seen of this functionality it seems more likely that it would be a spring release for Google I/O 2021.

Regardless of when it is released, it could be a compelling addition for both Chrome OS and Android if the implementation is as fully featured as we hope.