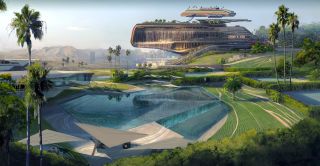 Cyberpunk 2077 is still a ways off, especially considering it was recently delayed to November 19. In the meantime, CD Projekt RED has been unveiling some of the districts within Night City.

The latest one, called Westbrook, is supposedly the nicest place to live in Night City, and is also home to casinos and clubs. Here's what we know so far about this district and others in Night City.

Westbrook is considered by many to be the best place to live and have fun in Night City. If you’ve got eddies, you come here to spend them. And if you don't? Well, take out a loan and pretend you’re on top of the world — even for just one glorious night. #ConceptArt pic.twitter.com/gGAnMVMYWLJuly 7, 2020

Rich people, namely celebrities and corporate people, live in North Oak, which is an area of Westbrook that used to thrive on crime but has since been cleansed and secured by expensive security companies.

In Charter Hill, executives that aren't rich enough to afford North Oak drive around in heavily armored vehicles with guards. Meanwhile, Japantown actually acts as the hub for the Yakuza. It's also home to many gaming parlors.

Night City has a strong Japanese influence because Japanese corporations were responsible for rebuilding Westbrook as well as other parts of the city after a nuclear attack in 2023.

Previously, CD Projekt Red showed off Watson, which is, conversely, "the bad neighborhood of Night City." It used to be home to nightclubs, skyscrapers, corporate offices and a top-end Medcenter, but an economic disaster plummeted the neighborhood into a gang-ridden place, home to the Maelstrom and Tyger Claws.

We're likely to learn more about what CD Projekt Red has in store for us in the coming months.