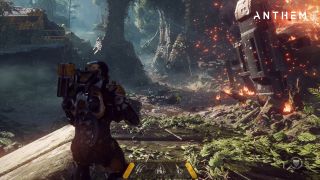 Anthem was one of the most anticipated action role-playing games in 2019, but unfortunately, it fell way off the mark into a seeming point of no return.

However, BioWare officially confirmed in a blog post that a small team is working on completely overhauling Anthem, confirming the rumors of an Anthem 2.0 (or Anthem Next) in the works.

BioWare studio director Christian Dailey wrote that a team of 30 or people are "experimenting and prototyping to improve on the areas we fell short of and to leverage everything you love currently about Anthem." However, Dailey admitted that "this is going to be a longer process."

Anthem will become the 'NEXT' No Man's Sky

To quell your fears about Anthem having a small team, Dailey adds, "And yes, the team is small but the whole point of this is to take our time and go back to the drawing board. And a small team gives us the agility a larger one can’t afford."

It sounds like Dailey and the rest of the team are really dedicated to bringing Anthem back to life, and I'm excited to see what that looks like. This situation is very reminiscent of Hello Games bringing No Man's Sky back to life with No Man's Sky NEXT after a terrible initial launch.

No Man's Sky was proof that a game can come back from the brink, so there's a chance that Anthem will do the same. I didn't bother giving Anthem a try when it first launched, but I'm excited to see what BioWare cooks up.

Dailey also writes about being more transparent with fans, saying, "The reality is you will see things that look awesome but end up on the cutting room floor or things that you might think suck that you feel we are spending too much time on – but in the spirit of experimentation this is all OK."

Dailey also mentions that the team plans to consistently update fans on the project via a live stream, social media, or "the occasional feed of me curled up in a ball crying in the corner…"

It's unclear whether or not BioWare intends on relaunching Anthem for the Xbox Series X and PS5, or only current-gen consoles, but we expect to learn more soon.