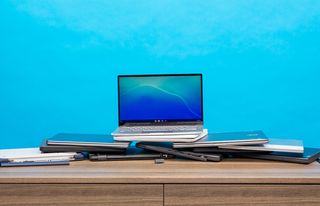 Chromebooks are great for students. They're inexpensive, easy to use and come with a bunch of great privacy features. But any laptop meant for the small, clumsy hands of a child needs to also be durable.

To save you from buying a laptop that breaks on the first fall, we dropped 11 of the best Chromebooks — both standard and rugged models — from a height of 2.5 feet and 4.5 feet onto carpet and concrete, and then inspected them to see which of these held up the best.

Among these popular Chromebooks is the Asus Chromebook Flip C434 (our favorite overall Chromebook), Google's expensive Pixelbook and a handful of budget laptops, like the Samsung Chromebook 3.

After dropping them and inspecting them for damage, we gave each of the 11 Chromebooks a durability score and ranked them from best to worst. This group of Chromebooks did a good job overall, but, as expected, some devices held up better than others.

Of the Chromebooks we dropped, the two standouts were the Google Pixelbook and the Samsung Chromebook 3. Priced at each end of the spectrum, these two laptops did an exceptional job in our drop tests, especially the Pixelbook, which looked brand new after slamming it against concrete from 4.5 feet. They also prove that non-ruggedized laptops can still be durable, although we found that, on the whole, rugged laptops held up better than their non-rugged competitors.

Read on to find out how 11 of the most popular Chromebooks did our drop test.

Chromebook Drop Test Scorecard (out of 10)

To measure the durability of the most popular Chromebooks, we first dropped them with their lids closed from a height of 2.5 feet onto carpet and concrete. We inspected them and then dropped them from 4.5 feet onto both surfaces.

If the laptop no longer turned on or was irreparably damaged, we stopped testing it.

In the first round, we pushed the closed laptops off a table from a height of 2.5 feet onto carpet and concrete using a mechanical arm.

In the second round, we dropped the same 11 devices from a height of 4.5 feet onto carpet and concrete to simulate them falling out of a backpack.

To truly test their durability, we then opened the laptops' lids and dropped them on their side from 4.5 feet onto concrete.

After each round, we gave the laptops a score out of a maximum of 5 points for a total of 10 possible points. From there, we ranked them from most to least durable. Below is a rundown of the point system:

1 point
System does not turn on.

You get what you pay for; Google's featherweight Pixelbook is an absolute tank.

Google clearly used quality materials on the pricey Pixelbook based on the results of our drop test. There was no discernible damage to the Pixelbook's chassis after the first few drops, apart from a tiny nick on the back-right corner.

Incredibly, the Pixelbook not only survived our 4.5-foot drop onto its side with the lid open, but it barely showed a scratch. If we were selling the Pixelbook as used, we'd consider it in "very good" condition despite everything it went through. We look forward to seeing how Google's new Pixelbook Go holds up in our drop test.

Despite its low price, the Samsung Chromebook 3 proved to be a durable machine after our first set of drops. We didn't notice any damage on the chassis and the laptop remained fully functional. We were especially impressed by the lack of cosmetic damage to its chassis after we dropped the Chromebook 3 from 4.5 feet onto concrete.

The Chromebook 3's plastic bezel separated from the lid when we dropped it from 4.5 feet onto its side.

Fortunately, we were able to snap the bezel back into place. Apart from that scare, the Chromebook 3 did a remarkable job, sustaining practically no permanent damage.

The rubberized plastic bumpers around the Lenovo 300e Chromebook's chassis protected it from sustaining damage in all of our tests. The only notable casualty was a bit of plastic on the front edge that rubbed away from the base. There was also minor separation between the display bezel and the outer frame.

We were especially impressed when the higher drop onto concrete didn't cause any notable injury to the 330e Chromebook. It booted up when we opened the lid. Unfortunately, a closer look revealed a thin line of pixels at the very top of the display that appeared brighter than the rest.

The front-right corner of the Chromebook 11 3180 dented slightly and some of the rough texture rubbed off, leaving a smooth surface underneath when we dropped it from 2.5 feet.

The injuries the Chromebook 11 3180 sustained on our 4.5-foot drop looked worse than they really were. A part flew out of the laptop when it hit the ground. That turned out to be a plastic hinge cover, which easily reattached. There was still a good deal of cosmetic scarring on the Dell, from paint wearing off to bruising around the corners.

The bottom of the Chromebook 11 3180 unclicked from the frame after our third drop test but we snapped it back into place without issue. We were happy to see the Chrome logo light back up when we opened the lid, but the left touchpad button depressed twice –– once at the half-click and once when the left-click registered –– indicating some sort of physical damage to it.

There was some minor fraying of the plastic on the right edge of the HP Chromebook 11 but the laptop remained in pristine condition after our first round of drops.

The second round wasn't so kind to the Chromebook 11. The plastic over the laptop's hinge almost came clean off. I was able to snap the piece back on but not well enough to close the gap between the hinge and the bottom display bezel. Apart from that, the Chromebook 11 appeared to be in great shape.

Our toughest test  — a side drop from 4.5 feet –– cracked the Chromebook 11's deck, exposing its cheap plastic build. On a positive note, everything else that popped off –– the display bezels and frame –– snapped right back into place.

Of the rugged laptops we dropped, the Asus C202SA fared the worst after our first pair of drops but did much better on our third drop.

We got a close look at the inner workings of the display after the C202SA's plastic hinge cover went flying when the laptop hit the ground. That surprisingly didn't affect how the lid opened and closed, and I had no problems snapping the piece back on.

More concerning is how the C202SA's display bezel separated from the frame. Again, we were able to snap everything back together. The C202SA looked in surprisingly good shape after all three drops, apart from a slightly bent lid that was no longer flush with the base when closed.

Acer touts the Chromebook 11 N7's MIL-STD-810G durability, claiming that it can be dropped from 4 feet up to 26 times. If we ever doubted that claim, we don't anymore  — at least, not if the laptop is closed.

This low-priced rugged Chromebook didn't bat an eye when it landed from 2.5 feet onto carpet and concrete. There were some minor scuff marks on the back edge of the lid, but that was all the damage we could find.

The bottom of the plastic hinges separated from the Chromebook 11 N7 when we dropped it from 4.5 feet. But the pieces snapped right back on and there weren't any mechanical issues.

Of the non-rugged Chromebooks we dropped, Samsung's Chromebook Plus 2-in-1 was worse for wear after we dropped it from 2.5 feet onto carpet and concrete. The bottom panel popped off the deck and the stylus shot out of its garage.

The frame separated even further after we dropped the laptop onto concrete, forming a large gap between the stylus and its slot.

Acer's Chromebook R 13 showed the most damage of the aluminum laptops after the 2.5-foot drop onto carpet. The front-right corner of the laptop had a small dent on the deck and the lid above it was scuffed.

Some paint also rubbed off on the lid after we dropped the laptop onto concrete and the deck separated from the bottom panel.

Ouch. Our third 4.5-foot drop onto the side of the Chromebook R 14 took a serious toll. Our eyes went wide when we lifted the lid to find that the panel didn't raise with it.

That's right, the display separated entirely from the aluminum lid. All the connections remained intact, so the screen still turned on when I manually lifted it back onto the frame. Unfortunately, there were a few scratches on the glass to go along with the Chromebook R 13's dented lid and chipped deck.

We didn't see any damage on the Lenovo Chromebook C330 2-in-1 after it dropped from a height of 2.5 feet onto carpet. The laptop's stark white paint chipped on the rear corners when it landed on concrete, but the damage was minimal.

Unfortunately, the top-right corner of the display separated from the lid after we dropped the notebook from 4.5 feet onto concrete. The laptop still turned on and there was no damage to the glass itself, but we weren't able to pop the display back into place. That's a shame because the rest of the laptop looked in good condition.

Our third drop test proved devastating for the Chromebook C330. The bottom-left corner of the Chromebook C330's plastic deck cracked off when we dropped the laptop onto its side from 4.5 feet. The screen also separated from the lid and we weren't able to snap it back into place without the proper tools.

The Chromebook C330 powered back up but our optimism was squashed when the laptop shut down at random intervals. Overall, the Chromebook C330 did a fine job on our first few tests but was unusable after our side drop test from 4.5 feet.

Asus' Chromebook Flip C434 is our favorite overall Chromebook, so we hoped the laptop would prove to be durable. Sadly, the laptop's aluminum chassis suffered severe damage on the corner drop.

Our 4.5 feet drops proved too much for the Chromebook Flip C434.  The laptop booted back after a slight delay and its integrated touchpad buttons broke. I could still use the touchpad to move the cursor and tap-to-click, but the right and left click buttons had sunken in and there was visible separation between the touchpad and the trim around it.

Other exterior damage included some bends in a few areas of the frame, several scratches on the bottom panel and some small nicks on the black bezel above the display.

The Chromebook Flip C434 was already damaged enough after the second drop, which makes me feel sorry about what happened in Round 3. After landing on its side from 4.5 feet, the Chromebook Flip C434's screen shattered in the top-left corner, sending a web of cracks deep into the center of the screen.

Perhaps even more concerning was that the bottom-left corner of the deck bent upward and the frame separated from the bottom. This raised a red flag given how close the damage was to the volatile lithium-ion batteries housed underneath. To our complete shock, the Chromebook Flip C434 turned on when we opened the lid (revealing a block of dead pixels) but abruptly went dark a few moments later.