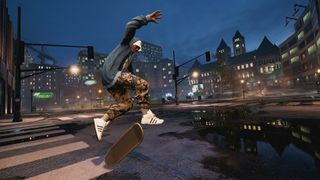 The Summer Game Fest, which will be playing host to a number of reveals over the course of the summer, kicked off this morning with the announcement of a remastered version of Tony Hawk's Pro Skater 1 and 2.

While the latest installment in the series, Tony Hawk's Pro Skater 5 (2015), wasn't a critical hit, fans have continued to clamor for remasters of the early games. Now Activision is finally ready to deliver.

The reveal was made live on The Game Awards YouTube channel and showed the trailer for the game along with an interview with Tony Hawk and Jen Oneal, the Studio Head for Vicarious Visions (the developers behind the remaster).

The game is shooting to be a faithful reproduction of those originals in terms of the level design, playable characters, moves, and music, while introducing some of the more advanced mechanics from the later games and, of course, delivering everything at up to 4K resolution with HDR lighting.

One aspect of the remaster is the ability to endlessly string tricks together. As someone who sunk too many hours into the originals, stringing together stricks was definitely one of the most compelling aspects of those games, and now you'll be able to easily share those masterpieces with your friends online.

The game will support multiplayer in both local split-screen as well as online. There is also a robust skate park creation tool that lets you build your own parks and share them with your friends.

Tony Hawk's Pro Skater 1 and 2 will be available on September 4 for PS4, Xbox One, and PC. It will be $39.99 for the standard game or $49.99 for a deluxe edition with extra in-game content. If you pre-order a digital copy of the game you'll get access to an early playable demo prior to the launch of the game.