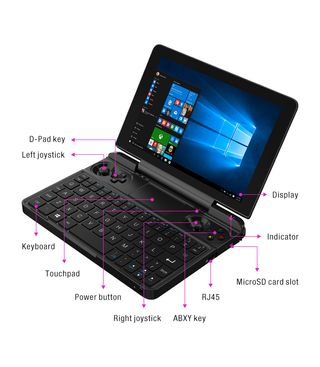 The GPD Win Max -- powered with a 10th-gen Intel Core i5 Ice Lake processor with Iris Plus and 16GB of RAM -- can't stack up against performance-dominant gaming laptops with top-tier Nvidia RTX graphics cards, but its tiny digital footprint is an eye-catching draw for gamers seeking a more portable device.

So, all you guys saw this leaked video? pic.twitter.com/RISnTGFe4KMarch 14, 2020

According to Notebookcheck, the tiny gaming laptop delivered some nifty frame rates for popular games.

For some titles, though, the performance falters on the GPD Win Max.

The mini gaming laptop sports dimensions of 8.1 x 5.5 in x 1 inches and weighs 1.8 pounds, according to Liliputing. Stand-out features of the GDP Win Max are the left-and-right joysticks, D-pad and A, B, X and Y keys sitting right above the keyboard. On each side of the computer, there are two shoulder buttons.

The 8-inch, mini gaming laptop with alluring built-in controls is expected to ship later this year after an upcoming crowdfunding campaign.