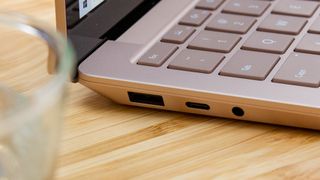 Update April 28: The Verge verified that the presentation is indeed from Microsoft and that the speaker is a Surface technology specialist working at the company for more than 10 years.

The reason? The company believes people who buy its products are international super spies in need of top-notch security. Not really, but the company argues that liquid nitrogen can be used to freeze your RAM and steal your data.

The presentation was leaked by WalkingCat on Twitter and verified by The Verge.

Surfaces don't have Thunderbolt because its insecure 🙃 pic.twitter.com/lb7YYOOQ4YApril 25, 2020

The speaker argues that an attacker could use liquid nitrogen to preserve your RAM, then move it to an external RAM reader and access all of your RAM, including encryption keys.

If an attacker gets close enough to you to steal your RAM, I'm sure you have more problems to worry about than them whipping out a can of liquid nitrogen.

Microsoft's apparent reason for excluding Thunderbolt 3 ports is directly related, unfortunately. Thunderbolt uses Direct Memory Access, so that means it can read and write directly to the RAM without other components getting involved. It's one of the reasons why Thunderbolt is so fast, but some sneaky attacker can slip a device into that slot and steal your encryption keys or inject malware into your system.

Yes, the threat of that is definitely more plausible for an everyday user, and yet, in Windows 10 1803, Microsoft introduced Kernel DMA Protection, which protects users from that exact vulnerability.

Microsoft eliminated its very own fear about Thunderbolt security, which might mean that we'll see Thunderbolt technology on new Surface devices. However, it doesn't seem like we'll see upgradable RAM since Microsoft seems to believe that everyday users are subject to liquid nitrogen attacks.